Guest Post: "Accountability Lists Are Such Fun!" by The Realist

"Inside every progressive is a totalitarian screaming to get out." - David Horowitz 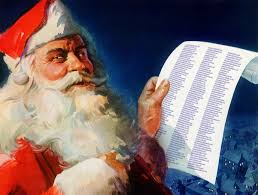 One of the most remarkable things about 2020 is how the leftists/progressives/communists/Democrats really let their masks slip and put their full totalitarian urges on display. COVID-19 became an excuse for all kinds of absurd and draconian restrictions on the lives of normal Americans. Throw a presidential election on top of that, and the leftists/progressives/communists/Democrats seem to have lost all inhibitions when it comes to reining in their totalitarian urges.

A few days after the election, Alexandria Ocasio-Cortez was encouraging her followers to save off incrimination tweets, posts, and photos: "Is anyone archiving these Trump sycophants for when they try to downplay or deny their complicity in the future? I foresee decent probability of many deleted Tweets,
writings, photos in the future[.]" (Tweet posted 3:16 PM 11/6/20.)

(I won't even get into the perpetual rumblings of gun control advocates for firearms owner lists and firearm registration lists, and how such lists could be abused. I won't go into the documented attempts by "journalists" to dox concealed handgun license holders in some states.)

The leftists/progressives/communists/Democrats have demonstrated, beyond the above examples, that they have no reservations about using the FEC data to target their political enemies.

I decided see how difficult it would be to get a list of political donors in the city where I live. I live in a city of roughly one-million people. I went to the FEC web site, set up a couple filters, and downloaded around 320-thousand donation records for this election cycle to my computer in about six minutes -
that is total time, with most of that time consumed by the actual download. It took longer to import the data into a spreadsheet program and sort it.

I also downloaded the FEC donation data for a nearby suburb with a population of roughly 400 thousand people. There were over 140-thousand donation records for that suburb.

The FEC data are donation records. So, if someone made five donations to a particular campaign, there would be five records. And, these records disclose all donations - I saw donations for as little as one dollar.

On the left side of the Browse Individual Contribution page are fields for various filters, including zip codes and cities. The state filter is buried under the "More contributor details" tab - click on the "+" in the circle to expose the state filter.

Once you press "Export" in the upper right of the window, a bar will appear on the bottom indicating that a CSV (comma-separated values) file is being prepared for download. Once the the file is prepared, a "Download" button becomes active allowing you to download the file to your computer. Click the "X" in the circle next to the "Download" button to close the download bar. (If you are wanting to export more than 500,000 records at once, you will have to get it from an FEC FTP server. I have not experimented with the FTP download option.)

You should try to download FEC donation data for your AO while it is still available. It may become useful to you in unexpected ways.

Once the data is downloaded and imported into a spreadsheet program, you can start analyzing it. I will leave that analysis as an exercise for the reader.

I will note that many candidate donations are actually made to a political action committee (e.g. WinRed, ActBlue), but earmarked for that candidate or candidate committee.

There are some restrictions on using this data for political or commercial purposes (see https://www.fec.gov/updates/sale-or-use-contributor-information/). If you intend to use this data for any commercial or political purpose, you should first discuss that proposed use with your attorney.

In 2020, the leftists/progressives/communists/Democrats boldly stated their desire to create lists of their political enemies. As I have described above, it is easy to do with FEC data. The FEC data contains a wealth of information about political donations to a wide variety of candidates and electoral causes.

I would encourage you to download the FEC data for your AO. You can learn a lot just looking at the data, even if you don't take the next step and start creating your own lists.

Email ThisBlogThis!Share to TwitterShare to FacebookShare to Pinterest
Labels: The Realist

... from Greg Ellifritz at  Active Response Training . Plenty of good stuff here, but let me focus on a few.     Greg links to an article f...