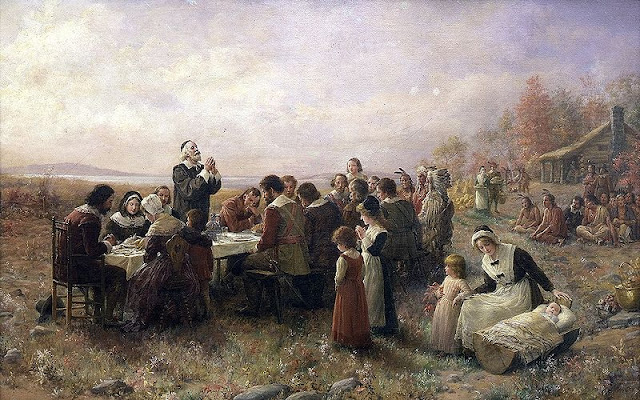 "The First Thanksgiving at Plymouth" (1914) By Jennie A. Brownscombe
Last Friday, President Nelson asked members to give thanks each day for a week in a post on social media. Since today is Thanksgiving, it is appropriate to express thanks to our God for the many blessings He has given us. My oldest brother once pointed out that while our family had never been rich (or even been particularly well off), we also had never starved.  And that is what I think of today: I have a roof over my head and my wife has prepared a wonderful feast for later today.

The Federalist Magazine has put together a series of articles concerning Thanksgiving, ranging across a multitude of topics including how the Pilgrims starved (and many died) their first winter because they had practiced socialism, and this taught them to value individual freedom and private property which led to a prosperous second year, to one unearthing new information of how far back the Thanksgiving tradition extended, to how the Pilgrims planted the seeds to self-rule and constitutional rights. One article looked at some of the Presidential Proclamations from President Grover Cleveland suggesting how we should spend Thanksgiving. From his 1885 Proclamation:

The American people have always abundant cause to be thankful to Almighty God, whose watchful care and guiding hand have been manifested in every stage of their national life, guarding and protecting them in time of peril and safely leading them in the hour of darkness and of danger.

It is fitting and proper that a nation thus favored should on one day in every year, for that purpose especially appointed, publicly acknowledge the goodness of God and return thanks to Him for all His gracious gifts.

Therefore, I, Grover Cleveland, President of the United States of America, do hereby designate and set apart Thursday, the 26th day of November instant, as a day of public thanksgiving and prayer, and do invoke the observance of the same by all the people of the land.

On that day let all secular business be suspended, and let the people assemble in their usual places of worship and with prayer and songs of praise devoutly testify their gratitude to the Giver of Every Good and Perfect Gift for all that He has done for us in the year that has passed; for our preservation as a united nation and for our deliverance from the shock and danger of political convulsion; for the blessings of peace and for our safety and quiet while wars and rumors of wars have agitated and afflicted other nations of the earth; for our security against the scourge of pestilence, which in other lands has claimed its dead by thousands and filled the streets with mourners; for plenteous crops which reward the labor of the husbandman and increase our nation's wealth, and for the contentment throughout our borders which follows in the train of prosperity and abundance.

And let there also be on the day thus set apart a reunion of families, sanctified and chastened by tender memories and associations; and let the social intercourse of friends, with pleasant reminiscence, renew the ties of affection and strengthen the bonds of kindly feeling.

And let us by no means forget while we give thanks and enjoy the comforts which have crowned our lives that truly grateful hearts are inclined to deeds of charity, and that a kind and thoughtful remembrance of the poor will double the pleasures of our condition and render our praise and thanksgiving more acceptable in the sight of the Lord.