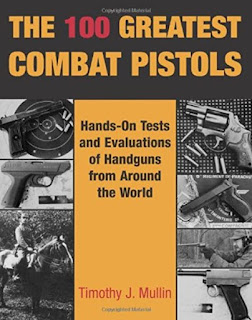 This is the first of three books that Mullin published evaluating military arms: later books covered rifles and light machine guns, and submachine guns, machine pistols, and shotguns. I'm sure that Mullin is not the one that chose the title because it is misleading. The book isn't about the "greatest" combat pistols, but instead covers some 100+  handguns used by major militaries from approximately 1880 to 1990, providing Mullin's own evaluation of the firearms as a combat weapon based on his experience in the military in Vietnam, law enforcement, and as a civilian shooter and writer. Some were excellent in his opinion; most were indifferent; and probably more than you would expect were terrible.

Obviously, it currently being 25 years after the book was completed, the book is somewhat out of date because it does not include some of the more modern polymer handguns that have gained acceptance among various military and paramilitary organizations. The intent of the book wasn't to provide information on the latest military arms, however, but to provide information on firearms one might encounter in out-of-the-way places around the globe. But for someone interested in military weapons and wanting something more than the bare statistics or history of the weapon, this is a good book to add to your collection.

Mullin's evaluations consisted of shooting the weapon on a target range at 50 feet, and using the handgun in a police-style "cinema range", combined with his thoughts on how easy it was to activate or deactivate the safety, general feel, the quality or usefulness of the sights, etc. There were some firearms that were terrible as target pistols, but proved very effective on the cinema range--and vice versa--but Mullin gave greater weight to its performance on the cinema range.

Through the book, and more comprehensively at the end, he provides his thoughts on what is needed in a military pistol, some of which won't sit well with experienced shooters. But, as he explains, his focus is on qualities for a trooper on the front lines with little or no experience in handguns, and little interest in handguns to boot, so he tends to emphasize passive safety features more than would an experienced shooter. For instance, throughout the book, he mentions his preference for military pistols using a form of magazine safety to avoid accidental discharges after a soldier has "unloaded" his weapon.

Mullin also makes an interesting test of the effectiveness of various popular handgun calibers against two loaded AR magazines such as a soldier or marine would carry in an ammo pouch. The results from this was that 9 mm ball from a Beretta 92 penetrated the first magazine and got stuck in the second; 9 mm Makarov did not go through even one magazine; .45 ACP ball ammo penetrated one magazine and only dented the second; but Czech AP rounds fired from the Beretta 92 had complete penetration of both magazines, pouches, and a 900 page book, coming to rest in the ground.

Another factor to keep in mind is that Mullin has more concern for what would make a good backup weapon for a frontline soldier or marine over someone behind the lines, which means that he places greater weight on small size and light weight over large and cumbersome handguns. This comes from his own experience in Vietnam where a lot of soldiers carried privately purchased small revolvers that they could carry in the breastpocket of their fatigues as a backup in the event of a primary weapon malfunction.

And, due to the limitations on ammunition design and construction imposed by the Hague Convention, which prohibited explosive ammunition and hollow-points, he tends to prefer larger calibers over smaller. In this regard, he definitely holds that the .45 ACP is the superior pistol cartridge for standard full-metal jacket military handguns unless penetration of body armor is a concern.

Interestingly, although Mullin likes the Colt 1911, he did not think it was very good as a military pistol because it needed to be carried cocked and locked to be quickly ready to fire, and lacked a magazine safety, making it too complex to safely use by standard troops. Mullin disliked the Browning Hi-Power because of its hard to use manual safety. Ironically, neither of the semi-auto pistols that made his top 5 had magazine safeties.

As noted above, one of Mullin's intents was to provide information about firearms that one might come across in journeys around the world, particularly if one had to obtain a weapon from less than legal sources. As part of his discussion, he notes that "you may be in a position where you can get a weapon but not the proper ammunition." He goes on to relate:

One thing that Mullin mentions repeatedly is how much more effective handguns would be if the person had access to Très Haute Vitesse (THV) ammunition: ammunition using high velocity solid bullets that were good at both barrier penetration and wounding.

The bullets had a sharp point which in conjunction with the high velocity was intended to provide excellent barrier penetration. However, the sudden widening of the bullet behind the point was designed to generate a wide wound channel, and the light weight meant that it would quickly lose velocity, both in the target and (should it miss) in the open air. 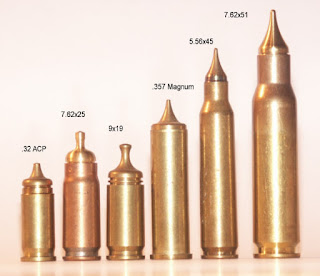 (Source)
Although the source cited above indicates that the bullet material was copper, other sources indicate that the bullets were brass. In any event, they were not allowed to be imported into the United States, having been decreed illegal armor-piercing handgun bullets. Because the manufacturer, Société Française de Munitions (SFM), had been relying on the U.S. market for sales, the loss of access spelled the end of the French efforts, although the same or similar projectiles continued to be used in South Africa.

The Dutch performed more formal tests that were written up in a research paper. The abstract reports:

The Très Haute Vitesse (THV) bullet was introduced to meet the requirements of law enforcement officers, as an alternative to larger calibre fully jacketed bullets, since expanding or exploding bullets are not relevant in Europe. To examine the effect of the THV bullet in tissue, especially the size of the lesion and the degree of overpenetration, 11 recently killed pigs were shot with the weapons used by the Danish Police Force and a 9-mm pistol for reference. The ammunition was THV in the calibres 7.65 mm, 0.38, and 9 mm, using conventional fully jacketed bullets for comparison. The lesions were considerably larger when the THV bullet was used, the entry wound in particular, being roughly twice the diameter in the case of the THV bullet as compared to the fully jacketed bullet of similar calibre. Only one 7.65-mm THV bullet overpenetrated the target when fired against the thorax or abdomen of the pigs and then with only minimal residual energy. All fully jacketed 7.65-mm bullets, all 0.38 bullets, with the exception of one THV bullet, and all 9-mm bullets overpenetrated the target. The 7.65-mm THV bullet produced a lesion which in its extent resembled that of the fully jacketed 9-mm bullet, and should be a suitable alternative for the Danish Police Force.

Velocities with these bullets is so high--well over 2,000 f/s--that I suspect that hydrostatic shock plays a role in wounding.