"Rise of Skywalker"--The Propaganda Is Strong In This One 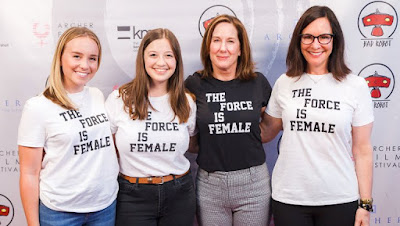 Normally I would have had my oldest son take my two younger boys to the theater, but the oldest son was going with friends, so I made the sacrifice--and spent the next 3 hours (including ads and previews) twiddling my thumbs in irritation on a Saturday evening in a theater that was only between 1/2 and 2/3 full.

The purpose of these films, as best I can judge, was to destroy the legacy and goodwill created by the first six Star Wars films, especially the first trilogy that we all loved from the 1970's and 80's. That is, everything done by the main characters in the original Star Wars, Empire Strikes Back, and Return of the Jedi was a failure: the New Republic that followed the destruction of the Empire in Return of the Jedi failed and fell victim to a new empire called The First Order; Han and Lea's son had turned to the dark side of the Force, killing all of the new Jedi but for Luke; Han had become a loser father, running away from his responsibilities to take up his old ways of crime (and killed off in the first film); Luke had fled to an obscure planet, home to the first Jedi temple, and become a bitter old man rejecting the way of the Jedi (ultimately burning the few books remaining from the Jedi order) and dying at the end of The Last Jedi; and, as we learn in this most recent installment, Emperor Palpatine, seemingly killed at the end of Return of the Jedi, had not actually died, but had been orchestrating his return to power. In essence, the whole of the original trilogy had been for nothing.

The only major character that survived from the original trilogy without being sullied was Lea, who had become the wise old woman leading the Resistance. Unfortunately for the directors, producers and writers, the actress that played Lea, Carrie Fisher, died shortly after The Last Jedi was filmed, so her screen time in this latest film was necessarily limited to parts that could be cobbled together from left over bits of film from the prior two movies in this latest trilogy, and it shows. It was painfully obvious that certain scenes were written in order to fit around odd bits of dialogue in whatever clips could be scavenged.

The leftist propaganda has been pretty blatant in these films. Besides destroying the two main white male characters from the original film, the new hope for the universe was placed into the hands of a wisp of a girl, Rey--an archetype of the "Mary Sue" character because they needed a female heroine that hadn't any of the flaws of Luke Skywalker and could instantly wield the Force--a black man (Finn), who was a deserter from the First Order; and the Latino looking Poe, an ace pilot for the Resistance. Lea had become a fully trained Jedi as well, with powers even exceeding that of Yoda ... because "The Force Is Female". And the Resistance is colored, LGBT, overweight, and prone to hissy fits.

Although this latest offering is more subtle about its propaganda than The Last Jedi, its all there. The First Order is overwhelmingly white, male, and human--except for the blacks it has been enslaving to act as soldiers. Yes, whites enslaving blacks--Jar Jar Abrams stooped that low. But a coalition of colored people, oppressed aliens, and the LGBT were able to come together to destroy the First Order. In a flash back scene, showing Luke training Lea, Lea handily beats Luke in a light saber duel establishing herself as the dominant female. Lea's and Han's son, Kylo Ren, dies for no apparent reason at the end of the film, leaving Rey as the only force trained individual in the galaxy: truly the Force became female.

Besides the Leftist propaganda, the other major irritant with this film is lack of quality of writing. Although this film is not as disjointed as The Last Jedi, it, like many other films, has the annoying habit of makings it protagonists as strong, or as weak, as the situation demands in order to make a certain scene or point. The power and abilities of Rey and Kylo Ren vary throughout the film depending on what the writers needed. When they must be weak, they are weak. When they must be powerful, they are powerful. And Rey gets new force powers as needed to advance the plot. Similar issues exist as to difficulties that need to be overcome by the protagonists. Twice in the film important MacGuffins were destroyed, which should have left the main characters with no path forward. But, fortunately, they were able to extract the data from a droid when needed. Deus ex machina writ large.

And that pretty well sums up the film: it hits all the politically correct notes of Leftist wokeness, and is a series of deus ex machina moments. Not surprisingly, then, the film has fared worse than the prior movies in the trilogy. Screen Rant reports:


According to Variety, The Rise of Skywalker made $176 million domestically over the weekend. That's a far cry not only from The Force Awakens' then record-breaking $247.9 million, but also The Last Jedi's $220 million. Even though The Rise of Skywalker has one of the highest opening weekends of 2019, its numbers absolutely pale in comparison to Avengers: Endgame ($357.1 million) and couldn't even top The Lion King ($191.7 million).

Email ThisBlogThis!Share to TwitterShare to FacebookShare to Pinterest
Labels: Reviews, Society and Culture