A Couple From Anonymous Conservative

The Anonymous Conservative often likes to point out that the world operates differently than we believe. A couple recent posts seem to illustrate this.

First up is an account of a young girl kidnapped and gang raped by three Muslim gangs in a single day, escaping from one to then fall into the hands of the next. Here is the story (see photograph below): 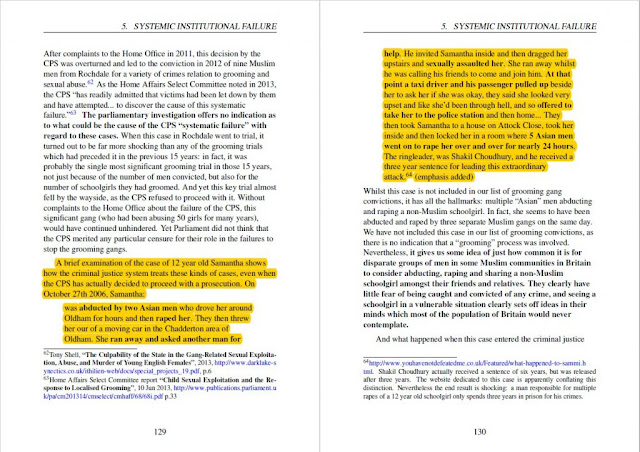 Anonymous Conservative asks: "Now ask yourself, is that migrant community that depraved, that a young girl in distress runs into three sets of people, and all have the immediate response to kidnap and gang rape her? What is the statistical probability of that, even in a Muslim community?"

The second story relates to the poisoning in Iceland of Richard Spencer (the founder of Jihad Watch, not the former Democrat who sabotaged the Alt-Right movement by making it appear to be a neo-Nazi movement). Spencer gives his account here, but the key parts are as follows:


“The accused in the case are suspected of having poisoned Robert Bruce Spencer with narcotics by putting a combination of amphetamine and MDMA into his drink.”

The Assistant Prosecutor also writes: “A recording from the security camera of the place shows the accused Sindri hand a siphon over to the accused Sigurður, who afterward takes the siphon to the bathroom. When he comes back to the bar, he takes the drink into his hands, and puts in under the bar table and seems to be doing something with it. Afterward, he stirs continuously in the drink like he is mixing something into it. The accused are at this point very secretive and there is no doubt that there is something more going on than just a simple ordering of a drink.”

It can also be seen in the recording that before Sigurður Ólason goes into the bathroom with the siphon he takes something from his right pocket and shows it to Sindri Geirsson and to the witness. It can also be seen that just before Sigurður Ólason enters the bathroom, he puts his hand in his right pocket. The recording shows also that Sindri Geirsson is also stirring in the drink, and one point there are two siphons in the glass. They ordered three drinks in three similar glasses, and the drink that was brought to me was the only one that had a siphon in it. “The alleged poisoned drink is the only one marked by a siphon,” the police say in their description of the events shown in the recording of the security cameras.

The Assistant Prosecutor concludes: “In light of all this and given the evidence of the case, especially the recordings of the security cameras, I think this case if brought to court would likely result in a guilty verdict.”

Nevertheless, the case was dropped. Spencer also had the poor luck to be treated by a doctor, Hjalti Már Björnsson, who also recognized him and urged him to drop his work, while, according to Spencer, failing to take even basic steps to treat Spencer. Anonymous Conservative comments:


Several things stand out to me. One, the poisoner recognized Robert Spencer in a bar. I know who he is because I travel in these circles, but I am quite certain I could walk by him in a bar and not notice him, and I am an American in these circles. How many random Icelanders would recognize him in a bar? Two, he gets an ultra-lefty doctor who is familiar with his work, recognizes him, and purposely fails to treat him. Finally, the people involved are all above the law. But he seriously needs to understand eating in restaurants and drinking in bars is now off limits for him. Notice Robert Spencer is the guy who always has to report to the airline counter before he is allowed to enter the airport and head to his plane.