Paying For Our Own Extinction 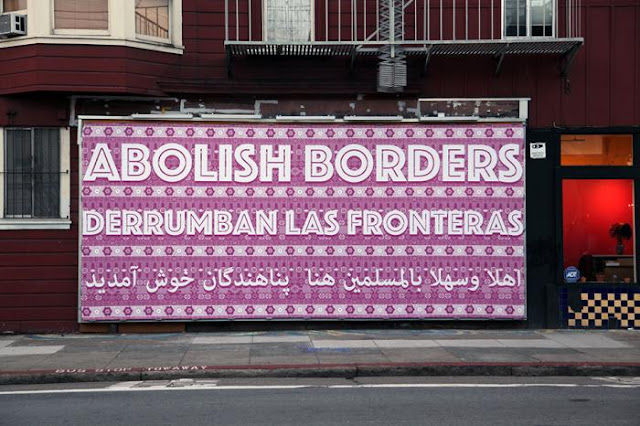 The Abolish Borders mural shown above is supported by Galeria de la Raza, and is based on Gilda Posada’s Destroy White Supremacy Project.

The Galeria de la Raza is funded by the usual leftists and your tax dollars, to-wit:

Posada describes his "work" as "a tribute to the many people who decided that enough is enough and that they would not go down without a fight. This project is for the great celebration of the revolution that has begun on account of these policies. But most of all, this work is for those who come together to relentlessly radicalize a better future for tomorrow in the name of the generations that came before us and for those that are to come after us."

We are paying for our own extinction. Roosh V. posted an article the other day entitled "The Barbarians Will Solve Your Sterile Existence." While "first world problem" is used jokingly to refer to trivial, unimportant inconveniences of life only faced by the developed peoples, that the mural above, and what Roosh V. discusses, are actual, serious first world problem, which is that developed peoples are simply not reproducing enough to withstand the dark tide of humanity that threatens to overthrow the civilized world. He observes:

Nature doesn’t care about your egalitarian laws or your superior IQ. It cares about reproduction and power, and what the barbarians lack in intelligence, they make up for in life energy. We are the anomalies, we are the mistakes, and unless we re-discover the ways of family, tradition, and God, we must be ready to accept the inevitable end that it was us who become so weak as a people that we didn’t even bother having a gate, and that all the barbarians had to do was walk right in.

Roosh is not alone in his concern. Mark Steyn recently published a video entitled "Tomorrow by the Numbers" which discusses what Steyn calls the most important graph of our age.


The graph, published by Steven Sailor, has two lines: one showing the historical and projected population of Europe from about 1950 through 2100; the other showing the historical and projected population of Africa during the same period. The two lines crossed in the late 20th Century, with Africa rising rapidly. It is estimated that Africa will have a population--just by itself--of over 4 billion by 2100. Europe, on the other hand, has and will stay a steady 500 million. Except it won't, because the 4 billion in Africa aren't going to stay there. They will migrate into whatever area will let them. Although Steyn focuses on the Europe, it won't be the only destination of boatloads and planeloads of people. And the biggest threat we face is the idea that borders are obsolete, passe, and irrelevant.

Hearkening back to the writings of Oswald Spengler, we have become so divorced from our root culture that we no longer have a purpose. The will to power is used to describe why certain leaders come to dominate their group, their community, their country, or even their era. But our culture has become so civilized that we don't have the will to do anything; least of all, to save our civilization. Perhaps this is the great filter.

Perhaps I'm just feeling pessimistic, but, to be frank, I don't see the West, or even a sizable portion, rekindling the spirit that drove the scientists, explorers, and settlers of our past. It may be, as Rod Dreher suggests in his book, The Benedict Option, that the best we can do is preserve the precious things in Christian enclaves until the time of troubles passes. As the Anonymous Conservative notes, whatever is coming down the pike will mostly kill off what he terms the r-selected portions of the population. So, perhaps we play the role of Noah, with tight knit Christian communities serving as our Ark, sealed up while the rest of the world burns. But I can't see complete passivity being a winning strategy. So perhaps we become the badger, wolverine or bear: live and let live, but expect to be the subject of awesome fury if you cross us.
By Docent at May 18, 2017