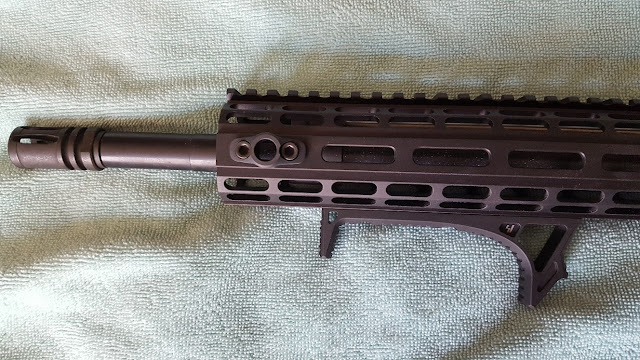 I haven't had time to write an in-depth review of Strike Industry's SI Link Curved Foregrip, although I've had it about 6 months. It is an aluminum foregrip designed to attach to either MLOK or K-Mod handguards. It is not designed to attach to rails, however. The configuration is designed to accommodate different styles of grips on the weapon, but allow the user to pull the weapon more forcefully into the shoulder, giving greater stability.

The open portion of the grip is about a handwidth from the front to the back. Putting the hand into the grip allows a very strong C-clamp grip or modified version. Alternatively, a shooter can just hook a finger or two over the front of the grip that projects down, or around the back portion of the grip. Although small for this purpose, the back portion can even be gripped and used like a vertical foregrip. The front part can also be used to provide a barricade stop function.

I have the black version. You can also pick it up in grey, blue or red. The latter two colors run about $5 more than the black or grey versions. MSRP for the black or grey models are $37.95,  but I picked mine up for $35 at a local store.

I cannot say enough in praise of this grip. I use a modified C-clamp grip (i.e., basically a version where the thumb isn't position so high as to go over the top of the handguard, but oriented along the side and higher than a standard/traditional method of gripping the handguard on a rifle) with this device, pulling the rifle deeper into the shoulder, and it keeps the weapon very steady and minimizes inadvertent muzzle movement. In dry firing, I've also noted that using this there is less movement just from the force of pulling the trigger than I see with some of my other rifles.

There are texture cuts into the device that provide a very positive grip. I have not had any issues with it slipping or sliding.

It costs only slightly more than a Magpul Angled Foregrip (AFG-2), which requires a rail section, and about $10 more than the AFG intended to attach to the MLOK system, but, I believe, a better than either two. It gets two thumbs up from me.
By Docent at May 21, 2017