Fintan O’Toole's piece at The Atlantic is ostensibly a review of The Next Civil War: Dispatches From the American Future by Stephen Marche. More than that, however, it is a warning about getting too wrapped up in the idea of impending civil war, but it it does happen, it will be the result of evil conservative white men. 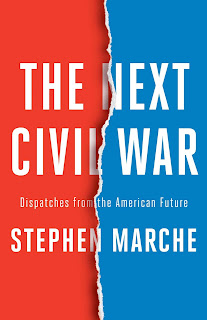 O'Toole begins on an odd note, essentially admitting to having fought for the IRA or similar against the British, but denying it was a civil war. He writes of the situation after "Bloody Sunday":

There was a horrible, 30-year conflict that brought death to thousands and varying degrees of misery to millions. There was terrible cruelty and abysmal atrocity. There were decades of despair in which it seemed impossible that a polity that had imploded could ever be rebuilt. But the conflict never did rise to the level of civil war.

He never explains why "the Troubles" should not be considered a civil war even though it meets the main definitions of "civil war."

Could the same thing happen in the United States? Much of American culture is already primed for the final battle. There is a very deep strain of apocalyptic fantasy in fundamentalist Christianity. Armageddon may be horrible, but it is not to be feared, because it will be the harbinger of eternal bliss for the elect and eternal damnation for their foes. On what used to be referred to as the far right, but perhaps should now simply be called the armed wing of the Republican Party, the imminence of civil war is a given.

Admittedly, if there were to be another American civil war, and if future historians were to look back on its origins, they would find them quite easily in recent events. It is news to no one that the United States is deeply polarized, that its divisions are not just political but social and cultural, that even its response to a global pandemic became a tribal combat zone, that its system of federal governance gives a minority the power to frustrate and repress the majority, that much of its media discourse is toxic, that one half of a two-party system has entered a postdemocratic phase, and that, uniquely among developed states, it tolerates the existence of several hundred private armies equipped with battle-grade weaponry.

It is also true that the American system of government is extraordinarily difficult to change by peaceful means. Most successful democracies have mechanisms that allow them to respond to new conditions and challenges by amending their constitutions and reforming their institutions. But the U.S. Constitution has inertia built into it. What realistic prospect is there of changing the composition of the Senate, even as it becomes more and more unrepresentative of the population? It is not hard to imagine those future historians defining American democracy as a political life form that could not adapt to its environment and therefore did not survive.

In other words, if there is going to be a civil war, it will be the fault of the evangelicals Christians, NRA members, and all those that support the Constitution and its republican form of government where each state gets two senators and we use the electoral college system to elect the president, rather than cede power to the high population blue states as is proper in liberal la-la-land. "If the conservatives just did what liberals wanted," I'm sure he thinks, "there would be no civil war." This seems a more and more common theme among the Leftists that write about the possibility of civil war in the United States.

After that set-up, O'Toole then turns Marche's book, which he primarily criticizes on the grounds that Marche fails to come up with a clear rule on what constitutes a "civil war" in order to distinguish it from insurgency, terrorism, etc.

All of [Marche's] scenarios are well researched and eloquently presented. But how they relate to one another, or whether the conflicts they involve can really be regarded as a civil war, is never clear. Civil wars need mass participation, and how that could be mobilized across a subcontinent is not at all obvious. Marche seems to endorse the claim of the military historian Peter Mansoor that the pandemonium “would very much be a free-for-all, neighbor on neighbor, based on beliefs and skin colors and religion.” His scenarios, either separately or cumulatively, do not show how or why the U.S. arrives at this Hobbesian state.

But, on the other hand, O'Toole castigates Marche for not doing enough to emphasize the racial violence in America, suggesting that such incidents should qualify as civil war. "Arguably," O'Toole asserts, "the real problem for the U.S. is not that it can be torn apart by political violence, but that it has learned to live with it."

In this context, feverish talk of civil war has the paradoxical effect of making the current reality seem, by way of contrast, not so bad. The comforting fiction that the U.S. used to be a glorious and settled democracy prevents any reckoning with the fact that its current crisis is not a terrible departure from the past but rather a product of the unresolved contradictions of its history. The dark fantasy of Armageddon distracts from the more prosaic and obvious necessity to uphold the law and establish political and legal accountability for those who encourage others to defy it. Scary stories about the future are redundant when the task of dealing with the present is so urgent.

In other words, thinking about the possibility of civil war in the future distracts us form the critical task of tracking down, prosecuting and imprisoning all conservatives that were in Washington D.C. on January 6, including President Trump.