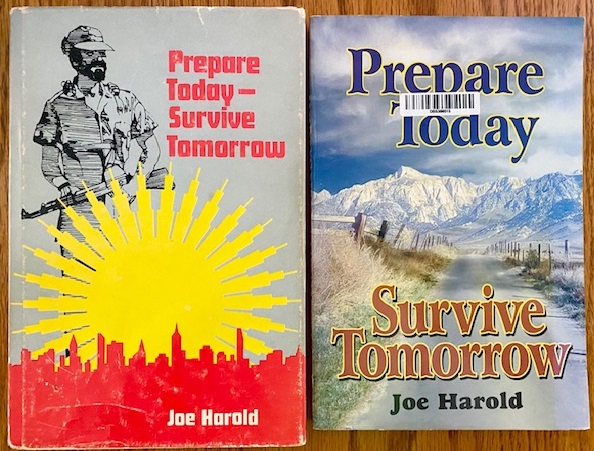 Years ago, I posted a short review of Joe Harold's book, Prepare Today - Survive Tomorrow. This was the book that really introduced me to the world of prepping (or survivalism as it was generally termed at that time).  Although the type of prepping espoused by Harold would now be termed Rawlesian  (after James Wesley Rawles), Harold's book was published over a decade before Rawles started making a name for himself.

The hard cover version of the book, shown on the left, was published in 1984 by a company in Utah called Horizon Publishers & Distributors, and that was the version of the book I was given in the mid-1980s and read and read again. It's a great book and I wish there were a PDF version floating around the internet to which I could direct you.

I occasionally look around to see if I can find a PDF version, however. No luck yet, but as I did so this last time I came across several Amazon links to used copies, including some that mentioned it coming out in paperback. That puzzled me since I thought that there was only ever the hard cover version. I found a place selling a paperback copy for around $6 and ordered it out of curiosity, and the book on the right in the photograph is what came.

The major difference, besides the binding, is the cover. The 1984 version sported a dust jacket showing a nuclear burst over a cityscape with a man in a military style uniform carrying an SKS (a weapon that, ironically, is not discussed anywhere in the book). The same illustration, but in black and white, is on the cover underneath the dust jacket. The newer version was printed in 1999, also by Horizon Publishers. The cover is a reproduction of a painting that appears to show the Wasatch Front down in Utah. Although the 1999 cover is certainly more visually appealing, I think it was an unfortunate choice because it doesn't communicate what the book is about. That is, the older cover at least informs you that it has something to do with a nuclear attack. Just looking at the cover of the second book, you could not be blamed if you thought it was the cover of a novel.

The back cover on the 1984 version advertises three other books put out by Horizon Publishers on survivalism topics. The back cover of the 1999 version has a summary of the book, reproducing the summary on the inside front flap of the 1984 copy.

The 1984 version runs 182 pages while the 1999 version runs 192 pages. The extra pages appear to be largely the result of the publisher switching to a slightly larger font which apparently required that the whole book be re-typeset.  There is a also a short publisher's note on why they hadn't updated the text to reflect the collapse of the Soviet Empire, and the biography of the author had been moved from the back flap of the dust cover on the 1984 version to the end of the book in the 1999 version. Finally, the publisher had corrected an embarrassing error in the original book where two captions had been switched around on the chapter about weapons. I would assume that the publisher probably took the opportunity to correct any other typographical errors in the 1984 version. Finally, a forward and dedication in the earlier volume that were given their own pages were crammed together in the later copy. Thus, the table of contents starts on page 11 of the 1984 version, but begins on page 9 in the later printing.

Based on the table of contents and quickly flipping through the paperback printing, it does not appear that there are any substantive changes between the books. The topics covered remain the same:

And, of course, a bibliography and index.

Having been published during the height of the Cold War, it is only natural to compare Harold's book to Bruce Clayton's classic, Life After Doomsday. They both were early books on survival and prepping with heavy emphasis on surviving a nuclear war with the Soviet Union and rebuilding afterward. The books are certainly not copies of each other, but rather complimentary. Although Clayton discusses other disasters, he was very much focused on surviving a nuclear war. Harold, notwithstanding the extensive material on surviving a nuclear attack, gave me the impression that he was actually more concerned about an economic collapse and surviving the "golden horde" that would inevitably flow out of the cities. He certainly devotes more space to weapons, making booby traps, and basic tactics than does Clayton. This may simply reflect Harold's law enforcement background and exposure to criminal gangs.

I also believe that Harold's writing style is a bit more friendly and approachable than Clayton's. Harold's book is a good introduction to the topic for that reason. And that is the final point: Harold's book is intended as a starting point and not as the end-all-be-all on the subject.

There are plenty of books on prepping today, but far fewer that discuss surviving a nuclear war. And even those that consider a nuclear attack focus primarily on a high altitude blast intended to produce an EMP blast to kill our electrical system rather than an attack involving hundreds or even thousands of warheads being launched to destroy cities, military bases, and missile silos, with the resultant fallout. This is where a book such as Harold's Prepare Today Survive Tomorrow would be a good addition to your library.  It is also a good book for those interested in the history of the survival movement because it gives a peek into what were the main concerns of preppers in the 1980s.

As a final note, I would also point out that there is a recent prepping book with the title Prepare Today Survive Tomorrow by L.G. Wellington. This is not Harold's book. I'm currently reading Wellington's book and hope to have a review up shortly.