Last summer I posted about how certain pinched types of plasma discharges resembled petroglyphs from around the world. 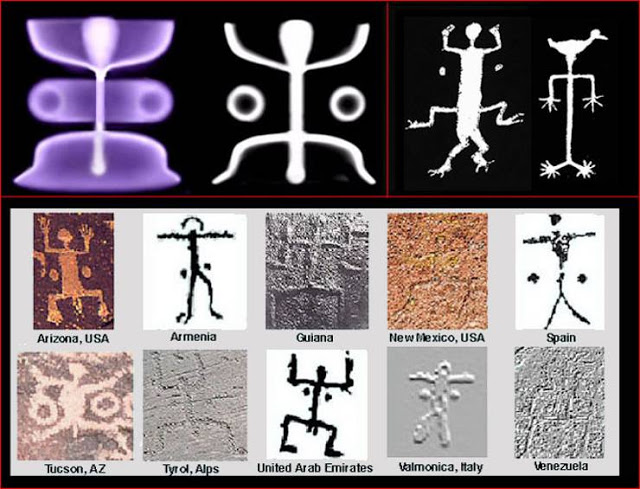 
"The Squatter Man (Squatting Man) Petroglyphs" The first two images in the top left corner represent how a certain pinched type of high-energy plasma discharge would appear to a viewer; the other images show examples of petroglyphs from around the globe apparently showing the same phenomena. For more information, see Peratt, Anthony L., "Characteristics for the Occurrence of a High-Current Z-Pinch Aurora as Recorded in Antiquity," IEEE Transactions On Plasma Science, Vol. 31, No. 6 (Dec. 2003) (large PDF). According to Peratt, these plasma discharges would occur from a current that would only be produced "if the solar flux from the Sun were to increase one or two magnitudes or if another source of plasma were to enter the solar system." (Peratt at 1210) (underline added). It offers a different possible interpretation of what John saw in Revelation 10:1-3.

The full article contains illustrations of other shapes of plasma discharges which vary somewhat from the squatting man type, but are still recognizably similar.


1 And I saw another mighty angel come down from heaven, clothed with a cloud: and a rainbow was upon his head, and his face was as it were the sun, and his feet as pillars of fire:

2 And he had in his hand a little book open: and he set his right foot upon the sea, and his left foot on the earth,

3 And cried with a loud voice, as when a lion roareth: and when he had cried, seven thunders uttered their voices.

The other day I was following a link on a different matter, and came across a story about what the author called God-Self icons from various cultures around the world. I was immediately struck by the marked similarity between these icons and the squatting man petroglyphs: 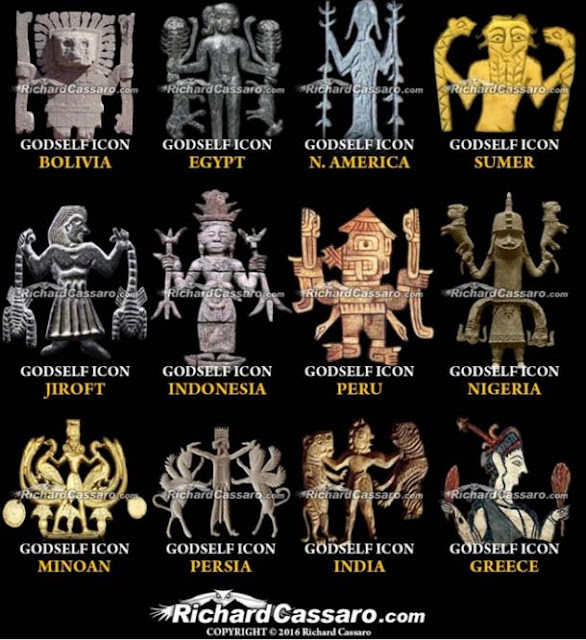