A Quick Run Around the Web--Immigration Crises Addition

Yesterday, I gave my thoughts about the immigration crises, backed up with some points raised by other pundits. Today, I thought I would just hit some highlights from other authors and news sites.

But back to the central point, why, then, if America sheltered my family, must the West turn back the refugees of Syria, of Somalia, of Libya?

Because they bring the source of infection with them. Armenians had managed, through some strength I sometimes find difficult to fully grasp, to hang on to their European culture and Christian religion through millenia of conflict with Islam. They had stubbornly resisted assimilation into Islam and its ideals. These refugees, for all that my heart yearns to give them sanctuary and a place to escape to, nonetheless carry Islam with them.

There are good Muslims in the world, and I want to make this clear. My own family lived only because an Ottoman official warned my great-grandfather that genocide was coming. This man, whose name I cannot remember — something that genuinely pains me, for my grandfather died when I was young and his stories are almost dream-like to me, now — paid for the ticket to America for my family, for English language lessons, and everything else needed to escape before it was too late.

I hope that I will meet this good and righteous man in the life to come. I hope God saw fit to accept him into His kingdom.

But Islam nonetheless is a contagion, even if some maintain a stubborn moral immunity to the infection. Where Islam goes, this violence will follow. You will never save all the little boys, you will never stop the slaughter. All you will do is bring it to your own shores.

And if there is something I know for certain, it is that my ancestors did not escape Islam only to see their descendants fight it again, once more in their own homes. 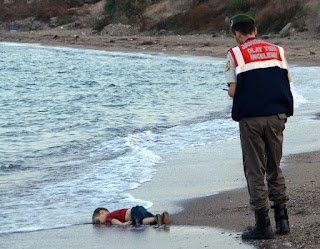 Update (9/13/2015): We has since learned that the father of the drowned Syrian boy wasn't even trying to get to Europe, but was the pilot of the boat that sank, and part of a human smuggling ring:

Also, apparently things were not so bad for him in Syria: The Guardian reports that "Abdullah Kurdi says he no longer wants to continue on to Europe and will take the bodies of his two sons and wife to be buried in home town of Kobani."

Email ThisBlogThis!Share to TwitterShare to FacebookShare to Pinterest
Labels: Europe

Recent Defensive Pistolcraft Post -- Shooting with One Eye or Both Eyes Open?

Jon Low at Defensive Pistolcraft published a new post this past Sunday . Jon has a lot of good information, comments, and links, so I advis...