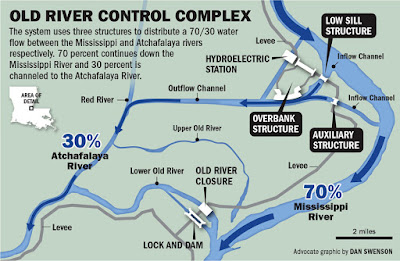 The AP reports that portions of New Orleans are already flooding, yet there is the risk of a hurricane that could cause additional flooding, overwhelming the levees protecting the city. The concern is tropical storm Berry, which is expected to grow to hurricane strength and dump as much as two-feet of rain in some portions of the Gulf states.

While this is worrisome in itself, there is possibly more at stake. On June 5, 2019, AccuWeather reported that "[t]he Mississippi River has been above flood stage in Louisiana at some points for more than four months now, which is the most consecutive days in modern history." At potential risk is the Old River Control Complex (ORCC). In 2013, I posted an in-depth piece on the history of the ORCC, entitled "America's Achilles Heel--The Old River Control System." I don't want to go over all of that again, but the gist is that for the last 150 years or so, the Mississippi has been trying to change its flow from its current channel to the Atchafalaya River, which is on a steeper grade and the natural direction for the river to flow, but Congress decreed that the Atchafalaya River would only receive 30% of the flow, with the remaining 70% continuing down toward New Orleans and the present day delta. To achieve this end, the Army Corps of Engineers constructed the ORCC which controls the amount of water flowing into each river.

Last month, "[f]loodwaters rushing toward the rising Mississippi River forced the U.S. Army Corps of Engineers to make the decision to open the rarely used Morganza Spillway on Thursday, June 6, to divert part of the river's flow into the Atchafalaya Basin." By rarely opened, they mean that the spillway had only been used on two other occasions:  in 1973, when flooding was so bad that part of the ORCC washed away, and in 2011. Last year, an article in The Advocate magazine about the ORCC warned that:


But the Mississippi isn’t just water. It also carries sediment that is piling up on the riverbed and constricting the downstream flow, which causes water to back up during a flood. Every cubic yard of silt means that much less water can fit in the channel, and the accumulation has built up over the years. Left to its own devices, the sedimentation would have been one of the factors driving the Mississippi flow into the Atchafalaya, before the Corps locked in the 70-30 split.

The riverbed downstream from the control structure has risen 30 feet since 1992, LSU hydrology professor Yi-Jun Xu said. Some sandbars have tripled in size, according to a summary of his research provided for the American Geophysical Union, where Xu presented his findings in December.

The professor believes a sufficiently large river swell could overwhelm the control structure, sending the Mississippi careening down the Atchafalaya basin.

Boyett said the Corps never says never, but that the Mississippi does not show signs of overwhelming the control structure any time in the near future, especially since the Corps built the new auxiliary control structure after the dangerous flood of 1973. The Corps anticipates having at least a decade or two until it needs to start worrying.

Xu pushes back against that assessment. It would take a "huge" flood or a major hurricane, he allowed, but one of those could strike any year. In 2011, the water in the Mississippi rose high enough that the Corps had to take the rare precaution of opening the nearby Morganza spillway, a flood control structure that tamed the water.

Scientists don't yet know what precise weather conditions could overwhelm the Old River complex, but anything stronger than the 2011 event would present a "real risk," and the risk will continue to increase as more sediment is deposited in the channel, Xu said.

“These changes diminish the river’s capacity to carry water on its current course. When sections of the river’s floor rise to a sufficient point, a sudden increase in flow — perhaps from a flood — could drive the Mississippi River to overwhelm the control structure and adopt a new path, potentially causing the Mississippi to be captured by the Atchafalaya,” his research summary states.


The Corps of Engineers believes that it would take a catastrophic flood--a megaflood--to overwhelm the structure, particularly with the improvements added after the 1973 incident.