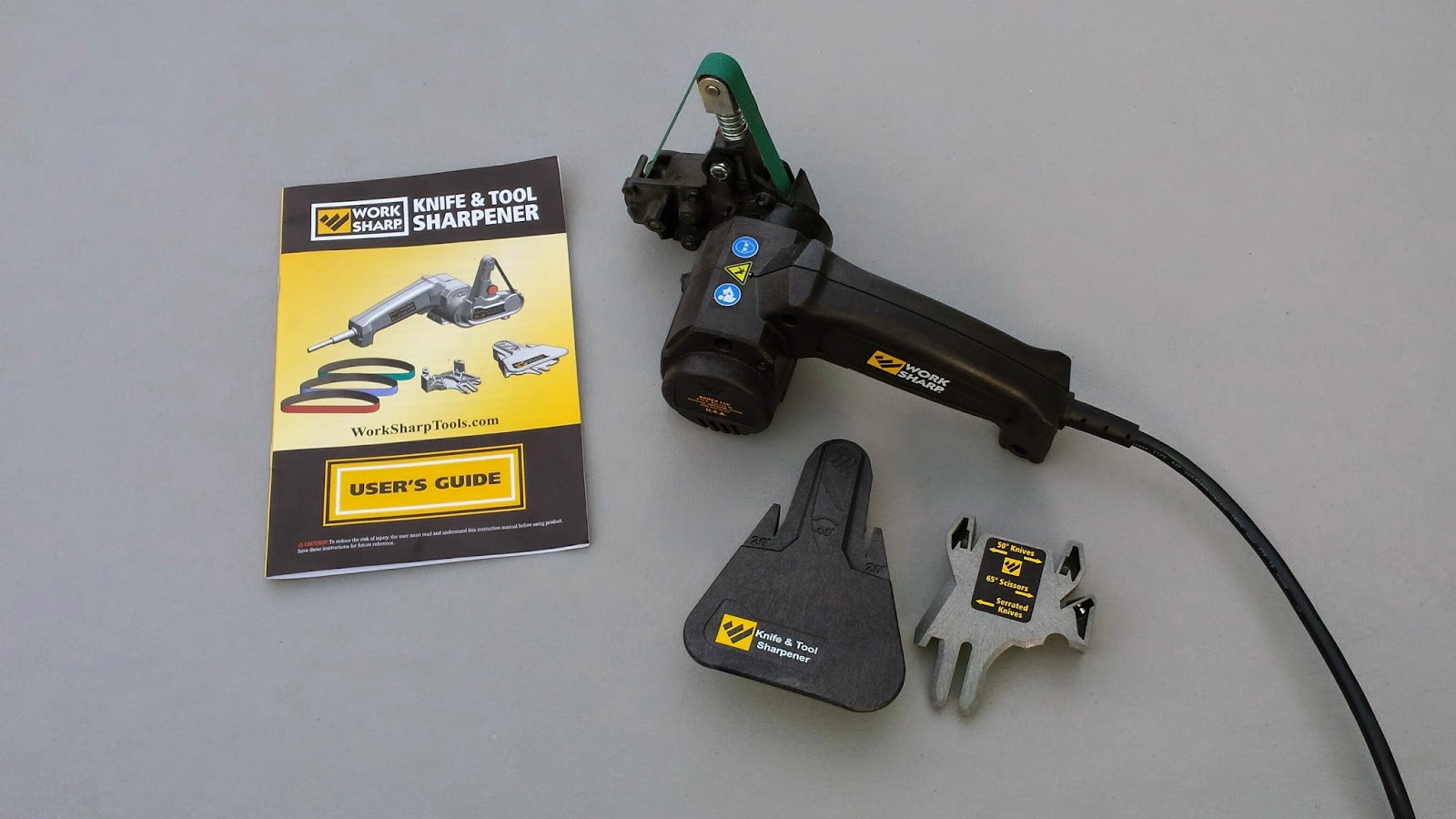 A dull knife is a dangerous knife. Unfortunately, I have never been very good at sharpening knives. I've used stones, steels, and several miscellaneous sharpening systems sold for sharpening kitchen knives with varying success. Using a sharpening system, like the Lansky, I can get a decent edge, but nothing to brag about. (On the other hand, my oldest brother--who also uses the Lansky system--is a "knife whisperer," able to hone his blades to be razor sharp, and will shave hairs from his arm to prove it).

One of the local hardware stores stocks the Work Sharp Knife and Tool Sharpener, pictured above. After a while of passing it by, I became intrigued enough to research the product. The reviews were very positive, so a couple months ago I took the plunge and purchased one. I have used it, so far, to sharpen my wife's kitchen knives, a couple pocket knives, a few camping outdoor knives, a sword/machete, and a lawnmower blade. Two of the blades (including the sword) were blunt and required a lot of work to put an edge on the blades. I will state that, hands down, this is the best sharpening system I have used.

The package includes the electric sanding/grinding belt motor pictured above, two sets of belts (3 grits--P80, P220, and 6000, for a total of 6 belts), the two sharpening guides pictured above, the user's guide/sharpening manual, and a DVD guide.

The motor uses a three position switch: a steady "on" switch, off, and a "deadman's" on switch providing power only while pushed down. The belts are easily changed by pushing the top pulley down, and turning slightly to lock down. One sharpening guide is intended for kitchen knives and pocket knives, providing a 20 degree cutting angle on each side (40 degree total). The other guide has a 25 degree angle, each side, suitable for outdoor knives; and cutouts for sharpening scissors and honing most serrated knives. The guides simple slip on over the belt. The tool can also be used without the guide for grinding edges onto tools or a lawnmower blade.

The 80 grit belt is intended for general grinding use, such as to sharpen tools. I also found it useful for a "sword" my son purchased at a gun show that had a blunt edge requiring a fair amount of metal removed to get a sharp edge. The 220 belt is used for most sharpening tasks. The 6000 grit belt is used final honing of the blade.

This product excels in three particular ways when it comes to knife sharpening. First, it is fast. One of the blades I sharpened had been sitting in a semi-sharpened state for over a year because it had come blunt, and so I was having to grind an edge into it. Even using a course sharpening stone and file, working by hand was very tedious and I had all but given up on the project. With the Work Sharp, I was able to quickly get the cutting edge on the blade. Touching up a knife is very quick with only two or three passes for each side of the blade.

Second, it produces a consistent edge and works well with longer blades. Using a system like the Lansky, you have to clamp a mount onto the blade. The sharpening stone attaches to a rod that feeds through a hole on the mount/clamp to maintain the proper angle. With a short or medium length knife, this works well enough. However, as the blade becomes longer, it becomes more awkward to manipulate the knife, in my opinion. Also, the angle of the edge changes because the greater the distance from the mount/clamp, the shallower the angle that the stone rests on the blade. Because you draw the knife through the guide on the Work Sharp, the angle remains steady even with a longer blade.

Third, because it uses a relatively narrow but flexible belt, it is easy to maneuver around a curve easier than attempting to use a rigid stone. This was particular useful in sharpening the mower blade, which is a mulcher blade and thus, there is a bend in the blade between the outermost edge and the innermost portion.

The only place where the unit takes a bit of extra attention is the tips of the blade. Obviously, when you get to the tip, the blade has little or no support from the guide, and its easy for knife to turn slightly, or even slip below the guide. I think this is a problem that could be solved by putting a tab or some other surface that the blade would continue to rest against as the tip is moved across the belt. Just remember that when you get to the tip, slow down, lift the back of the blade slightly so it continues to ride against the guide and be a little more careful. I expect that as I become more proficient with the Work Sharp, sharpening the tip of the blade will be less of an issue.

In any event, the test is in using the knives. My wife's first use after I sharpened the knives was to cut a tomato, and she described the knife more as falling through the tomato rather than cutting. In all, I think it has allowed me to do a better job in sharpening knives, and faster, than I had been able to do with sharpening stones or other systems.