Back in 2011, I lost my Benchmade AFCK knife, which had been my everyday carry (EDC) knife for over 10 years prior. Unfortunately, Benchmade had ceased production of that model. After a fruitless attempt to find something comparable to the Benchmade, I wound up getting a CRKT M16-12ZER folder, which I reviewed here. At the time of that review, I had used the CRKT for about a year. Although a good knife, overall, there were always a few things that I did not like.

First, and foremost, was that it only had a 3 inch long blade, which I thought was too short for a knife I might use for self defense, or even for some cutting tasks.

Second was the tanto point. In fact, the more I used the knife, the more I disliked the tanto point. Most of what I use a knife for is opening packaging--it seems everything is sealed in plastic. The tanto point, however, is more difficult to slide under the edge of a box, or to pierce a plastic wrapper. It is also inferior for any fine cutting work.

About a month ago, I decided that I wanted something better (well, actually, my wife got tired of my complaining and told me to get something better), and I purchased a Spyderco Police model folder. According to the Spyderco website, the blade is 4-1/8 inches long; the knife is 5.3 inches long closed, and 9.4 inches long open; and weighs 5.6 ounces. Below are a couple pictures showing the Spyderco versus the CRKT: 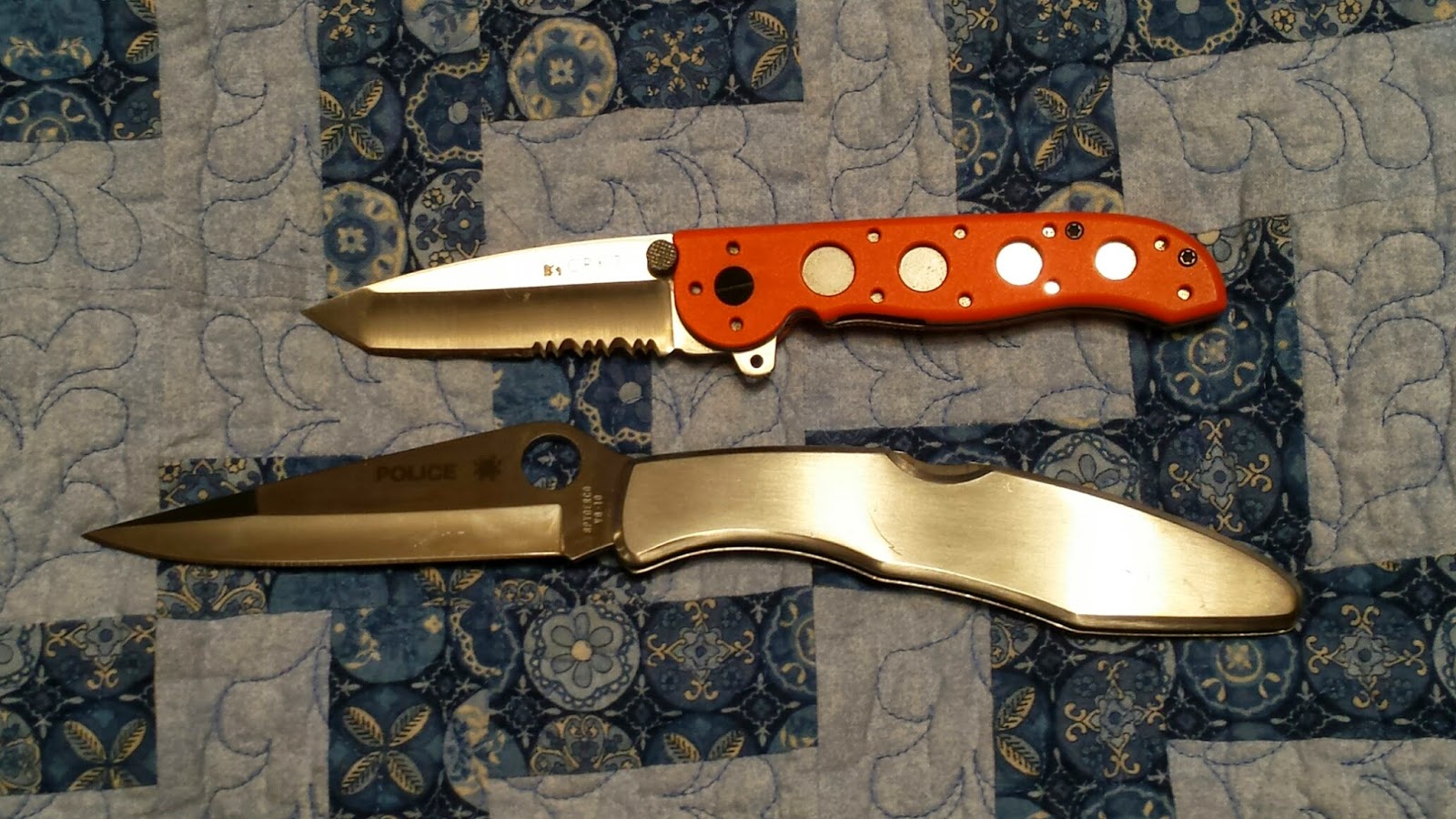 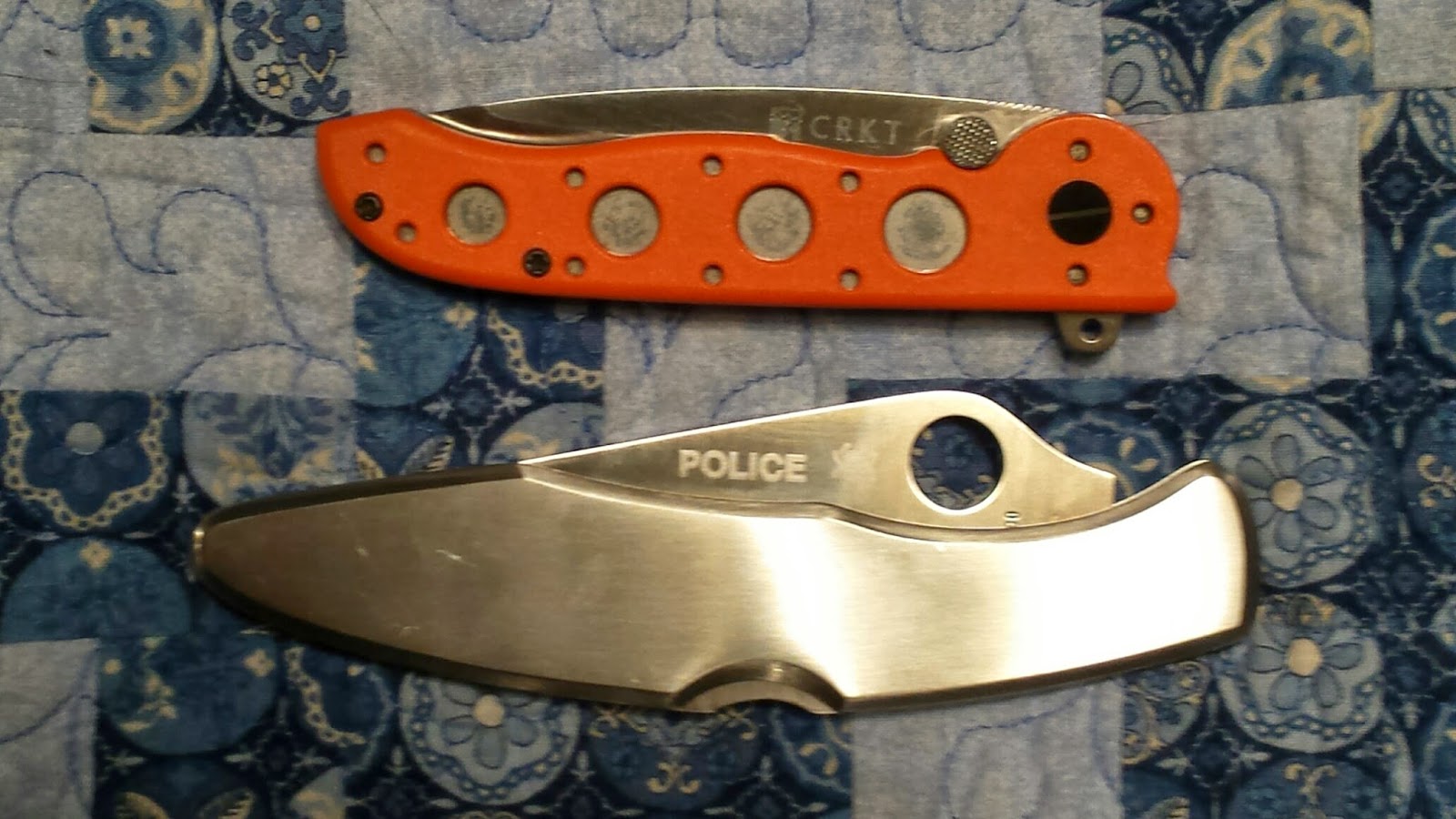 As you can see, the Spyderco is substantially longer as to blade length, with a larger handle providing a better purchase. However, although you can't see this from the photograph, the Spyderco is actually thinner through the body because of the stainless steel construction. It doesn't open quite as easily as the CRKT, but it still opens easily. I'd forgotten how much I like the round thumb hole for opening a blade. Although you can't see it in the photographs, there is a pocket clip.

Obviously, the Spyderco addresses the shortfalls I had with the CRKT knife. That is, the blade is long enough that, in a pinch, that it could be used for self-defense. In fact, the handle is long enough that with the blade closed, it could be used an impact weapon. The thinner point is better for fine cutting tasks as well as starting a cut by piercing plastic or cutting under the edges of a box.

The quality of construction is excellent. As you can see from the photographs, it is very difficult (almost impossible) to see the various pins. The grind of the blade is accurate and balanced, coming to a symmetrical point. It is a hollow-grind blade, which I prefer (the CRKT above also had a hollow-grind blade, but I've noticed that many knives do not). It was very sharp out of the box. There was no play in the blade, or gaps, and it locks solidly. Although it has acquired some scratches over the intervening month, the finish was excellent when I bought it. Overall, it is a very handsome knife and well made.

The size and shape of the handle allows a good grip. I wish there was a deeper finger cut on the front of the handle to prevent your finger from sliding forward onto the blade if you had to forcibly stab into something (a matter which I am very conscious about ever since I had to use my Benchmade folder to dig into an embankment). However, I have not had any problems with the knife slipping in my grasp, so this may be a non-issue.

To sum up, the Spyderco Police model is well-made and should be an excellent EDC knife.

Update (Nov. 30, 2015): So I've been using this knife for over a year and a half, and it has been an excellent EDC knife. The blade has done an excellent job of retaining its edge, although I use it for some task or another almost every day. I still wish it had a deeper finger cut, but have not had any issues with the knife slipping in my hand; but, in so stating, I must also acknowledge I haven't used the knife when it has been wet. In short, it has met or exceeded all expectations.
By Docent at April 13, 2014

Email ThisBlogThis!Share to TwitterShare to FacebookShare to Pinterest
Labels: Reviews