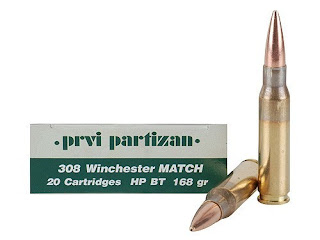 This is less of a review than some observations on the dramatic impact of bullet weight and accuracy.

When I bought it, I had some mil-surplus 7.62 NATO (which uses a 142 grain bullet) as well as some .308 Winchester (also using a 142 grain FMJ bullet and which I knew to be exceptionally accurate in a different rifle) that I used to test out the Parker-Hale.  While I expected that the mil-surplus probably wouldn't be the most accurate, I thought that the other .308 would work well. I was wrong. I could get no better than 4 or 5 inch groups at 100 yards from a sandbag rest, no matter which ammunition I used, which is terrible.

To be honest, my first thought was that it was the rifle. However, on reflection, I decided that, as a hunting weapon, the rifling probably had a twist rate intended for heavier bullets that would typically be used in hunting, rather than the lighter bullets used in military rifles.

Since I wasn't sure what weight to try, and realized that I might have to try different weights to find what worked best, I didn't want to fork over a lot of money on a box of ammunition. That is what drew me to the Prvi Partizan ammunition. It was $17 for a box of 20 rounds versus almost twice that for the higher quality hunting and target ammunition. I decided to start with the lighter weight, 168 grain hollow-point, boat-tail "match grade."

I have to say that I was surprised by the difference. From a sand-bag rest, I was able to get consistent 1-1/4 inch (3-round) groups at 100 yards, with the best group at 1 inch. I'm definitely not the best shot around, which means that the rifle and ammunition is probably capable of even better performance. (I would note that later testing with Hornady 165 gr SST "Superperformance" ammunition gave similar results).

While I knew that twist rate and bullet weight could impact accuracy, I had previously thought of balancing the two factors as part of fine tuning the accuracy of a rifle. Not true, at least with this rifle. And I was pleased with the performance of the Prvi Partizan .308 "Match" ammunition.
By Docent at February 09, 2012