A Year And Half On: Thoughts On My Vega Shoulder Holster 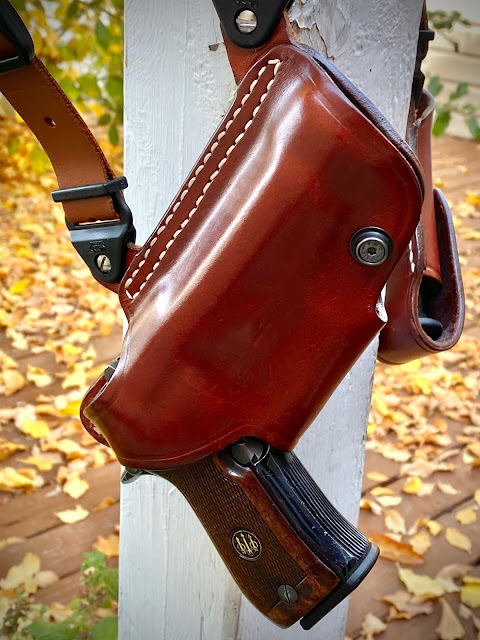 I first got the Beretta in 2018, mostly because it was a pistol that I had long wanted. It was originally intended as just a "fun" gun, and I didn't really have any intention of using for everyday carry. But in the spring of 2020, I got an email from Craft Holsters offering me the opportunity to review a holster of my own choosing. I'd always wanted to try out a shoulder holster. So I decided I would get one for

In April 2020, I published a review of a shoulder holster manufactured by Vega and sold by Craft Holsters. It was for my Beretta 84 pistol. Craft Holsters still offers this product, but not for the Beretta 84. Having used it for roughly a year and a half as my primary carry holster, I thought I would revisit the product and my thoughts about this holster in particular and shoulder holsters in general.

If you want more detailed information about the holster, see my original review. But, the short story is that I really liked it. I liked that I would slip it on and off fairly easily. I liked that it allowed me access to the handgun while in the car. I liked that it came with a double magazine pouch allowing me to easily carry reloads. And, since I was already use to weight on my shoulders from using suspenders, I liked that it was comfortable and balanced.

Since I started using it a year and a half ago, it has become my primary method of concealed carry. I use it at least four to five days per week, and have been doing so for more than a year. It works well under a sports coat or suit coat as long as they are unbuttoned. It also works well under a loose, unbuttoned shirt. I will wear a T-shirt with the unbuttoned shirt over that. If it gets too windy, I can button up one or two of the buttons to hold everything together. The other day, I wore it to a movie theater under a wind breaker. It is a very convenient way to carry a pistol.

The holster has survived the rigors of daily carry pretty well. The shoulder straps have stretched out a bit and now conform more closely to my shoulders, but it otherwise is pretty much in as good of condition as when I first received it. You can see in the photograph above that the finish on the leather is still good: nothing has faded or worn off, and the leather is not cracked.

I haven't pampered the holster, either. Two or three months after I received the holster, my son and I were returning from shooting. As the dirt track we were following neared a paved road, we came across a couple who had high centered their car. Their attempts to get loose had simply dug a deep hole under the passenger side front wheel. We eventually had to resort to laying on our sides or stomach using a small shovel to scrape out the dirt on which the car was resting, and then dig a hole for our jack to push one wheel up so we could fit some material under it to allow it to get out of the whole. All in all, it was an hour of hard physical labor in some awkward positions. Yet the holster held the pistol in place through it all.

I've practiced drawing and shooting, both dry-firing and with live ammunition, so I feel comfortable with using this system with this particular firearm.

The only issue I've had isn't the fault of the holster, but due to my also using suspenders. On occasion I've caught the thumb break on the suspenders and popped it open. Most of the time this has happened, it is when I'm rushing to put on the holster. On a couple occasions it has happened by bending and twisting which has put enough slack in the suspenders to allow a loop to catch the thumb break. Fortunately, the holster has a tensioning screw on it. The first few times it happened, I had the firearm fall out. But after I figured out what was happening and tightening the tension down, even if the strap comes undone, the tension will hold the firearm in place.

My son purchased a similar shoulder holster system made by Falco, and has had no such issues. He also doesn't wear suspenders.

In short, I'm happy with both this particular holster and with using a shoulder holster for concealed carry.

Email ThisBlogThis!Share to TwitterShare to FacebookShare to Pinterest
Labels: Holsters