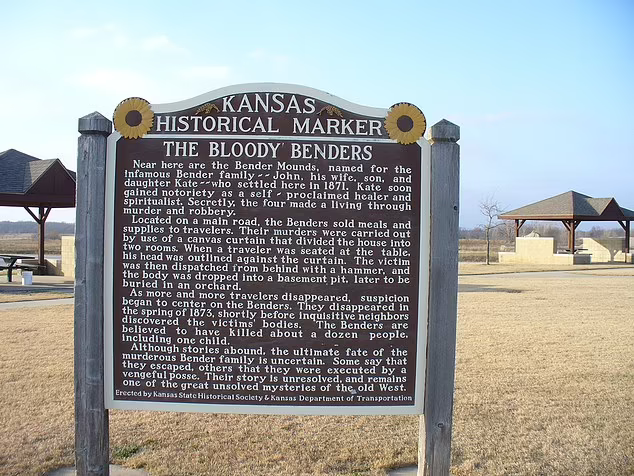 For those who like a stories of the macabre or true crime stories, the Daily Mail has an article that might interest you, "Little Slaughterhouse On The Prairie: Gruesome tale of 'America's first family of serial killers' known as the 'Bloody Benders' who bashed heads of 11 victims with a hammer and slit their throats to be explored in new TV series." The article begins by noting that a television series will apparently be produced based on research into an American frontier family that sounds like they could have been descendents of the fictional Sweeny Todd. According to the article:

... the family of four - husband and wife John Sr. and Elvira, and their two adult children John Jr. and Kate - [ ] would lure in weary travelers to their property, the 'Bender Inn', with the promise of a hot meal and rest before slashing their throats or crushing their skulls with hammers.

Victims' bodies were then thrown in the cellar and buried at night in the garden.

The crimes came to light when people became suspicious after people kept disappearing when they passed the Bloody Benders' home.

Before justice could catch up with them, the family fled and were never found.

The family, believed to have been of German or Dutch origin, ran a bed and breakfast for travellers passing across the frontier. They lived in the back of their cabin. In the front, beginning in 1871, they operated a small inn and store.

It was there that they took to murdering and robbing at least a dozen travellers who stayed at the lodging between 1871 and 1873.

So many disappearances were reported over that period that it is unclear exactly how many victims there actually were.

The legend goes that the Bender family would give the guest a seat of honor at the table which was positioned over the trap door leading to the cellar and had its back to a room divider.

It is believed their method was to smash their guests over the head with a hammer during dinner from behind a strategically-placed curtain before tipping their body through a trap door into a made-to-measure cellar.

One of the women would then leap on the victim and cut their throat to seal their death.

Once in the cellar, they stripped the body, taking anything they could find of value, and later buried somewhere on the property, often in the orchard.

It was noticed that the Benders' garden was always freshly ploughed but never planted.

Despite efforts to track the members of the family, including one effort that followed clues leading to New Mexico, the family was never found. And, in another interesting tidbit:

In a speech at a book fair in a Detroit department store in 1937, Laura Ingalls Wilder spoke of how the murders affected the community in which she lived.

'The night of the day the bodies were found a neighbor rode up to our house and talked earnestly with Pa,' she said. 'Pa took his rifle down from its place over the door and said to Ma, 'The vigilantes are called out.'

'Then he saddled a horse and rode away with the neighbor. It was late the next day when he came back and he never told us where he had been.

'For several years there was more or less a hunt for the Benders and reports that they had been seen here or there. At such times Pa always said in a strange tone of finality, 'They will never be found.''

Email ThisBlogThis!Share to TwitterShare to FacebookShare to Pinterest
Labels: History