"How To Silence A Recurve Bow"
Survival Lilly (9 min.)

Nearly 60% of novices’ rounds hit the head at the crucial three-foot distance, compared to just 21% of experts’ shots. That hit rate dropped to about 24% for novices at nine feet–but to a dismal 6% for experts. Every group’s hits continued to decline as distance expanded, but both intermediates and novices continued to out-score trained officers on successful headshots as distance grew. 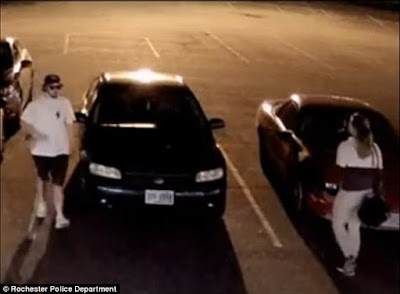 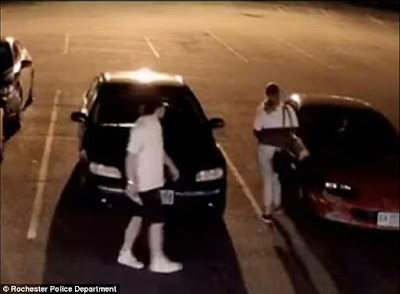 Of course, this is a perfect example where an attacker waits until a victim is away from possible witnesses or assistance and distracted (in this case, as she prepares to unlock her vehicle--assuming the red car was hers). Although the suspect had decided on his victim at least 8 hours prior, and kept a car between him and his victim to allay suspicion, there are certain "tells" that should have at least warned the woman to be on guard. First, there is the fact that this man "coincidentally" was walking across what appears to be a mostly deserted parking lot late at night.  The other is that, as he passes the bumper of the car separating him from his victim, he has already began to angle his course of travel, even though he was in view of the woman at the time.

Fortunately, the woman was not seriously injured, raped, or killed. It is not clear to me that she could have avoided the attacker: if she ran or tried to otherwise evade him, he may have still pursued and caught her (I'm going to be blunt--unless there is a gross difference in physical ability from the normal--for instance, a woman who is an athlete versus a very weak/out of shape man--a man is going to be physically faster and much stronger than a woman); but he also might have gotten frightened and left. Depending on when she saw the man, she may have been able to return to the Planet Fitness (hopefully there would have been other employees still there). If she didn't see him until the two were closer, she could have changed to walking to the other side of the red car, thus putting more distance between her and the attacker, and/or turning to keep him in view so she would know if she needed to run or otherwise keep away from him.

If she'd had a weapon, she could have prepared to draw her weapon (or, even, discreetly drawn it) in anticipation of an attack. I generally carry my R51 in a pocket holster, and, on occasions when I've been suspicious, I'll put my hand in my pocket with my fingers around the grip, ready to draw if necessary.

This is a German court, so the judge will likely free the refugees and apologize for the inconvenience that the trial caused them.

The CSB now translates the term anthropos, a Greek word for “man,” in a gender-neutral form 151 times, rendering it “human,” “people,” and “ones.” The previous edition had done this on occasion; the new revision adds almost 100 more instances. “Men of Israel” becomes “fellow Israelites;” when discussing Jesus’s incarnation the “likeness of men” becomes “likeness of humanity.” The CSB translates the term adelphoi, a Greek word for “brother” in a gender-neutral form 106 times, often adding “sister.” “Brotherly love” is translated “love as brothers and sisters.”
The gender-neutralizing pattern is also present in its translation of the Old Testament. For instance, where the NIV “gender-neutral” revision uses the term “human” or “humanly” for a masculine term, the CSB concurs with a “human” “humanly” or “human being(s)” 67 times. As the CSB translates the Hebrew term ‘dm (the word for adam), the generic “man, men,” it uses gender-neutral language of “human(s), humanity, human kind, people, person(s)” 242 times. The CSB also uses the term “mortal” or “mere mortal” to replace a masculine term 6 times. Numerous other instances of gender-neutral translations of masculine terminology exist across both testaments.

Dalrock discusses this in much more depth at this blog.

Because what happens if the voice of half of America is effectively silenced by the DC swamp and its media guardians? The Tea Party was the first manifestation of the anger out there at the establishment. It was polite – it even cleaned up its own messes after its peaceful protests. The media, and the same alleged conservatives who saw the Tea Party as a threat to their own position because it caused donors to start asking for results instead of simply writing checks, attacked the Tea Party. Well, then we got Trump, who was not nearly as polite, and who took the White House fair and square from the designated establishment candidate. And now they want to use non-ballot means to make sure the normals’ choice is again ignored.
What do they think comes after Trump? Someone nice?
Do they think we stop demanding we be heard? Do they think we give up on participating in governing the country that we normals built, that we normals paid for, and that we normals fought for?

* * *
No, that’s not going to happen. If liberals like chaos and even violence – and their *wink wink* denunciations of their own creature’s attempted conservative murder spree and their squealing delight in a high-profile play where the President is butchered onstage show they think they do – then the way to get chaos and violence is for them to succeed in their campaign of fascist, anti-democratic scheming against the guy who beat the harpy they nominated.
If you want real political chaos and real political violence, then just keep going down this path. You can’t light the fuse and not get the explosion. I saw what happens when you toss away the rule of law – don’t do it.

For decades white America made a desperate attempt to raise blacks to the level of the First World. It didn’t work. Instead saw a dragging down  of society to the culture of the ghetto. Blacks were behaving as usual as spoiled brats. Anything that upset them, as everything did, any expectation that they behave, led to cries of racism and depredations by such as Black Lives Matter.
As I  mentioned, my parents had said that blacks were could not function in the First World. It seemed that they were right. Desegregation had not worked, nor integration, nor quotas nor affirmative action nor Head Start.  What didn’t work was turning blacks into members of a European civilization in which they had no interest. It would have worked no better had blacks lived in China, Japan, or Russia.
Nothing worked and nothing is going to work. There is clarity in this realization, a clarity to admitting what is actually happening. It avoids tortured reasoning to show  that the dysfunction of blacks is due to anything and everything but blacks themselves. One need not make endless excuses for endless bad behavior, for the crime and dependency, the racial attacks, and the degradation of society.
The culture of the ghetto opposes everything usually believed proper in an advanced  society: high academic standards, equality of opportunity, good English, minimal obscenity, equality under the law, low rates of crime, reasonable self-reliance, freedom of speech. Black culture, intensely racist, encourages none of these and opposes most. It is tribal, based on identity, instead of principle.

We could have had moon bases, space stations, and super-fast train systems, but we instead wasted the money and resources on a fool's errand.