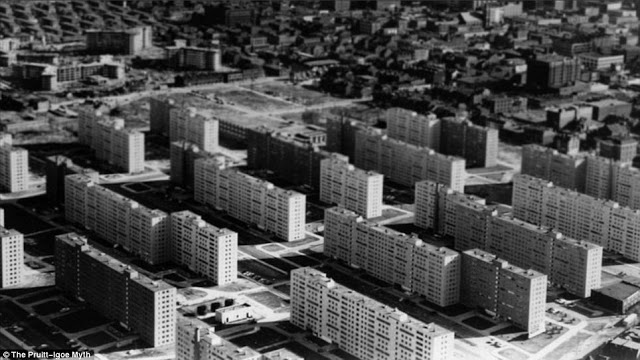 The Daily Mail has an article about the Pruitt-Igoe housing project in St. Louis, and its failure.


Pruitt-Igoe was devised as part of the massive urban renewal projects of the 1950s and 1960s.

Previously, the working class residents of St. Louis had been living in dangerous squalor with communal bathrooms and unreliable electricity.

The city commissioned what they thought was the solution: a 33-building modern complex designed by the future architect of the World Trade Center Minoru Yamasaki.
Originally envisioned as segregated housing—the name Pruitt came from a Tuskegee airman, while Igoe was a white man—the complex became all-black once segregation was outlawed and the whites began fleeing the inner city.

Pruitt-Igoe opened in 1956 to the wide-eyed awe of residents accustomed to far less from their housing. Green spaces invited their children to play and clean contemporary décor made residents feel, according to a woman quoted in the documentary, like they were in ‘a big hotel resort.’

Marketing footage from the time of the complex’s opening called it a reprieve from the ‘crowded, collapsing tenements’ that many of the new residents had grown up with.
And for the first few years, things were good at Pruitt-Igoe and the community there thrived as 24-hour patrols kept watch and maintenance crews kept everything gleaming.

Which, in turn, meant crime went up as fewer patrols were around to keep order.

It also meant nothing got fixed. The once revered project started to decay.

The city responded by raising rents and the tenants who remained weren’t able to afford it.

They striked in 1969, refusing to pay rent until conditions improved and the city eventually gave in.

But a water main would soon break and flood many of the buildings and surrounding area with raw sewage. The whole thing was declared a disaster area.

Buildings were quickly abandoned by tenants and began to fill up with drug users, criminals, and the homeless.

By 1972, three of the buildings would be demolished. Two years later, the rest would go down, too.

When I lived in Japan, there were apartment complexes similar to Pruitt-Igoe--some much larger, in fact. They went by the nickname of rabbit hutches, because they were simply an attempt to cram the largest number of people into the smallest spaces.

The Wikipedia entry for the project notes the following theories about Pruitt-Igoe's decline:


Explanations for the failure of Pruitt–Igoe are complex. It is often presented as an architectural failure;other critics cite social factors including economic decline of St. Louis, white flight into suburbs, lack of tenants who were employed, and politicized local opposition to government housing projects as factors playing a role in the project's decline. Pruitt–Igoe has become a frequently used textbook case in architecture, sociology and politics, "a truism of the environment and behavior literature",.

The Pruitt–Igoe housing project was one of the first demolitions of modernist architecture; postmodern architectural historian Charles Jencks called its destruction "the day Modern architecture died." Because it was designed by a leading architect and won a "building of the year" award (though no professional awards), its failure is often seen as a direct indictment of the society-changing aspirations of the International School. Jencks used Pruitt–Igoe as an example of modernists' intentions running contrary to real-world social development, though others argue that location, population density, cost constraints, and even specific number of floors were imposed by the federal and state authorities and therefore cannot be attributed entirely to architectural factors.

However, it also notes:


The buildings remained largely vacant for years, although sources on exact depopulation rate differ: according to Newman, occupancy never rose above 60%; according to Ramroth, vacancy rose to one-third capacity by 1965. All authors agree that by the end of the 1960s, Pruitt–Igoe was nearly abandoned and had deteriorated into a decaying, dangerous, crime-infested neighborhood.... In 1971, Pruitt–Igoe housed only six hundred people in seventeen buildings; the other sixteen were boarded up. Meanwhile, adjacent Carr Village, a low-rise area with a similar demographic makeup, remained fully occupied and trouble-free throughout the construction, occupancy and decline of Pruitt–Igoe.

Today, the site of the former projects is partially used as the site for Gateway Middle School and Gateway Elementary School, combined magnet schools based in science and technology, as well as Pruitt Military Academy, a military-themed magnet middle school. All schools are within the St. Louis Public School district. The rest is planted with trees. The former DeSoto-Carr slums around the Pruitt–Igoe have also been torn down and replaced with low-density, single-family housing.

The buildings were dehumanizing in a Metropolis sort of way. The question that should be asked is why anyone would have wanted to live there.
By Docent at January 29, 2017

... from Greg Ellifritz at  Active Response Training . Lot's of good links, as is usual; and, again as is usual, I will picked just a f...