Firearms are uppermost on the minds of Democrats, with a level of vitriol and hyperbole that we haven't seen for a long time. While Democrats have long described any weapon designed after 1940 as "weapons of war,"  Rep. Cedric Richmond (D-LA), House Democratic Assistant to the Majority Whip, decided to turn the hyperbole up to eleven, terming semi-auto weapons to be "weapons of mass destruction." Weapons of mass destruction (WMA) is a term used to describe nuclear weapons, biological warfare agents, and chemical weapons (NBC weapons). In other words, Democrats believe that an AR, AK, or some other modern weapon is the equivalent of a nuclear warhead! 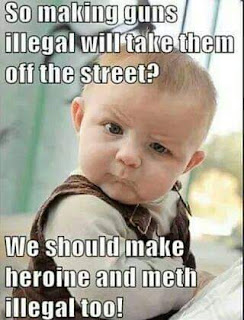 In any event, House Judiciary Committee Chairman Jerry Nadler (D-NY) is reconvening his committee early in order to address gun control. One of the bills he will consider is HR 1296, which is intended as a new and improved version of the 1994 AWB. So, let's look at what is in the bill (the full text of which you can view here). The bill is described as a bill "[t]o regulate assault weapons, to ensure that the right to keep and bear arms is not unlimited, and for other purposes." It has eight (8) sections and an appendix:
I will discuss some of the key aspects of Section 2 (definitions) with the operative language in Section 3.

The key provision is: "It shall be unlawful for a person to import, sell, manufacture, transfer, or possess, in or affecting interstate or foreign commerce, a semiautomatic assault weapon." A "semiautomatic assault weapon" has a lengthy definition, but includes the following:
There are some exceptions to the foregoing restrictions, the most of important of which it doesn't include any firearm "possessed" prior to the enactment of the bill--i.e., "grandfathered semiautomatic assault weapons." Helpfully, the law also stipulates that it does not apply to: a firearm that is manually operated by bolt, pump, lever, or slide action; is rendered permanently inoperable; or is an antique.

In the appendix, there are also very lengthy of lists of weapons specifically exempted from the law. Strangely, most of the lists are weapons that are not semiautomatic and would not fall under the purview of the Act. As for the exempted semiautomatic weapons, the majority are semiauto rifles or shotguns that have been historically used for hunting (e.g., the Browning BAR hunting rifles and the Remington 1100 shotguns). But the list also includes the M-1 Garand, certain models of the M-1 Carbine, the SKS (so long as it has a fixed 10-round magazine), and the standard Ruger Mini-14. Mini-30, 10/22 and PC 9.

The bill also provides: "It shall be unlawful for a person to import, sell, manufacture, transfer, or possess, in or affecting interstate or foreign commerce, a large capacity ammunition feeding device." A "large capacity ammunition feeding device" is defined as "a magazine, belt, drum, feed strip, or similar device, including any such device joined or coupled with another in any manner, that has an overall capacity of, or that can be readily restored, changed, or converted to accept, more than 10 rounds of ammunition." It does not include, however, a tubular magazine for rimfire .22 caliber.

One of the overlooked features of the prior AWB was that it didn't really provide any means for easily determining whether a particular weapon or magazine was pre- or post-ban. This bill would require manufacturers to serialize all weapons and magazines in a manner that would indicate when it was manufactured.

Then, to add insult to injury, the bill regulates the transfer of "grandfathered semiautomatic assault weapons." Transfer includes any sale, gifting, or loaning. Generally speaking, any transfer of such weapons must be made through an FFL which would have to run a NICS check. The only exception is when the "grandfathered semiautomatic assault weapon is, at all times, kept within the premises of [a licensed] target facility or [established] range," and the person to whom the weapon is transferred is not known to be ineligible to possess firearms. So, if you are hunting or target shooting in the field or forest, you can't legally hand the firearm to someone to use. On the other hand, it appears that the transfer restrictions would not apply to sales so long as the person to whom the weapon was sold stored the weapon on the premises of the target facility or range.

While existing "large capacity" magazines are grandfathered, there is no provision allowing for the transfer of a "large capacity ammunition feeding device".

Finally, the bill would require the "safe storage" of a "grandfathered semiautomatic assault weapon" (although, again, this doesn't apply to the government or law enforcement).

While the original National Firearms Act was a grave insult to the Second Amendment, this bill is an even more egregious violation of the natural right to possess weapons, and, I would hope, be intolerable to any true American.
Posted by Docent at 9:04 PM