Book Review: "The Sword of Michael" by Marcus Wynne

Book: The Sword of Michael (Depossessionist) by Marcus Wynne (288 pages). 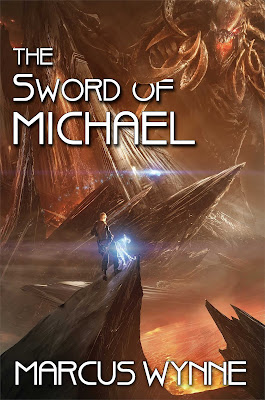 I'm going to go off the beaten track a bit here and review a fiction book that is not post-Apocalypse or post-SHTF (although it could be considered, perhaps, a pre-Apocalypse story!). Just for some background, I do not consider myself to be a fan of modern fantasy (i.e., a fantasy story in a modern setting). I have enjoyed Larry Correia's Monster Hunter International series, but had mixed reactions to Jim Butcher's Dresden Files series, Patricia Brigg's books, and those from a few other authors that I have tried.

I think the reason I prefer the Monster Hunter books over most modern fantasy is that they are straight up adventure or action, taking into account how powerful modern weapons can be against traditional monsters. In short, there is a lot of gun action by someone that knows guns. This is in contrast to other series that concentrate more on creating a gritty atmosphere than on moving the story forward. Frankly, much of the modern fantasy genre seems to imitate film noir themes and atmosphere, but with magic and monsters thrown into the mix.

Wynne's book is not a pastiche of the Monster Hunter books, but is similar in that it has clearly demarcated "good guys" versus "bad guys." And, it has gun action and fight scenes written by someone that knows guns and fighting.

One of the points that differentiates this book from other modern-fantasy is that rather than "magic", Wynne makes use of spiritualism--mostly Christian spiritualism, but some Native American and other types of mysticism (but which he generally treats as just a different interpretation of Christian spiritualism). Obviously the title of the book comes from the sword wielded by the Arch-Angel Michael, and Christianity shows up in many other parts of the work, both light and dark, as the protagonist, Marius Winter, must travel to a Dante-esque Hell to rescue the woman he loves.

The Christian spiritualism shows up on other ways. Winter's job, at the beginning of the book, is as a dispossessionist--i.e., helping rid people of troublesome spirits. Not so much an exorcist, in forcing the spirits out, but rather encouraging the spirits to "go to the light." In addition, Winter constantly must remind himself to be both meek (that is, submitting to the will of God) and humble (realizing the powers he uses do not come from him, but are gifts from God). In fact, the characters, as a whole, must struggle with comporting themselves with the beatitudes (while maintaining good trigger control) to defeat the forces of evil. The one dissonance is that certain of the characters, including Winter, engage in fornication. But this has been a constant of modern literature since, at least, the early 20th Century.

In short, without disclosing spoilers, this was a fun read with a different take than any other modern fantasy I've read, and certainly more upbeat than most. If you like Correia's Monster Hunter series, I think you will like Wynne's book.
By Docent at August 15, 2018