Storms in California--Freezing Temperatures in the East


A huge El Nino storm has begun battering California, with the West Coast bracing itself for heavy rain, snow, flash floods and possible mudslides.
Forecasters have said the torrid conditions are developing faster than expected, with some places even bracing for snow - and they say Tuesday's torrid weather is just the beginning.
They believe storms lining up along the Pacific coast could continue to wreak havoc across the state for the next two weeks.
Flash flood warnings on Tuesday were issued in Ventura, Los Angeles, San Bernardino, Riverside and Orange counties.


The National Oceanic and Atmospheric Administration said early Tuesday that rainfall could still be strong enough to trigger flash flooding and debris flows on fire-scarred hillsides.
Residents of the Silverado Canyon burn area in Orange County and the Solimar burn area in Ventura County have been told they may want to evacuate in advance of the storms, but have not been ordered to do so.
A flash-flood watch for wildfire burn areas is in effect through late Wednesday.

Besides today's storm, the article indicates that two more storms are expected on Wednesday and Thursday, bringing another 3 inches of rain to the San Francisco Bay area.

Meanwhile, on the other side of the Continental Divide, a polar vortex will bring unusually low temperatures according to Accuweather. I think a graphic portrays the matter better than words: 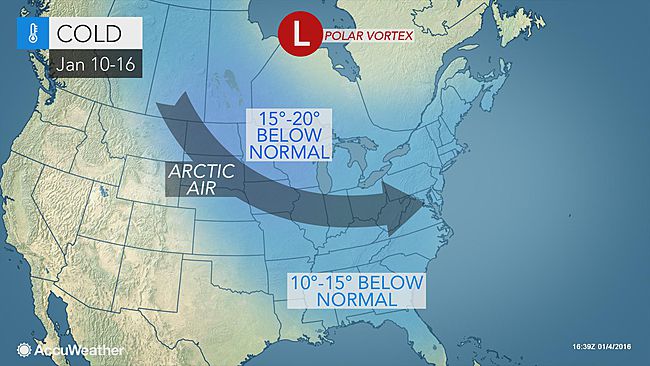