Review of the FN Five-seveN at Gun Nuts

Gun Nuts has a rental stress test/review of the FN Five-seveN pistol. 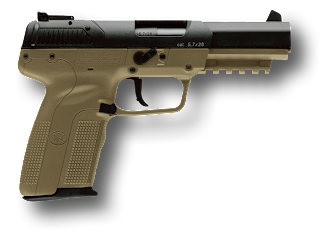 As you probably know, the Five-seveN shoots the 5.7 x 28 mm cartridge developed for the P-90 personal defense weapon--i.e., the modern term for submachine gun-type weapons. The Five-seveN was intended to supplement the P-90 by providing a common caliber. The cartridge itself is essentially a necked-down .30 Carbine, but with superior ballistics.


We’ve had the Five-seveN in the rental case for almost a year and a half now. It’s never been back to the gunsmith. And it’s not like the Taurus PT809 where it’s never been back to the gunsmith because no one’s rented it, the Five-seveN has had thousands of rounds put through it. It also tends to get pushed to low priority on the cleaning list because, while it’s rented a reasonable amount, the 1911s, the Glocks, the Sigs, the Berettas and the M&Ps all take precedence due to their extreme popularity.

The comments are pretty positive as well.

Normally, I wouldn't recommend a weapon that uses an unusual round--and would probably never do so for a combat rifle. However, there are occasional exceptions out there for handguns (the .357 Sig, for instance), and from what I've read about the 5.7 mm, it may be one of the exceptions.
By Docent at December 11, 2011

I post a lot about the decline of our civilization, including topics about declining morality, the war on fathers and the traditional f...