Book: Suburban Defense: A cop's guide to protecting your home and neighborhood during riots, civil war, or SHTF. by Don Shift (2021, 404 pages). 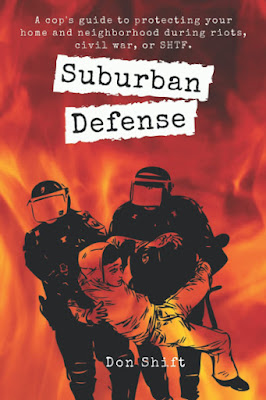 As you can already guess, Shift's background is in law enforcement in the greater Los Angeles area; specifically, as a member of the Ventura County Sheriff's Office. He brings his experience in law enforcement together with his interest in disaster preparation to provide a detailed look at how you could defend your home and neighborhood against mobs, looters and bandits in a post-SHTF situation such as after a natural disaster, economic crash, or civil unrest such as we saw in 2020.

Because of the timing of this book, Shift was able to incorporate information and trends we saw play out in the rioting of 2020, including the political motivated prosecution of people that tried to protect themselves or their homes from the hands of mobs of protesters, rioters, looters and arsonists. He also takes the realistic assessment that not all disasters or events will be periods where we are without rule of law (WROL), or that even if we experience WROL, it most likely will only be temporary such that readers will eventually face scrutiny by law enforcement. Thus, his advice covers legal options for defending your neighborhood, but also has suggestions if the breakdown will be longer and much worse.

His book is split into the following parts:

So the foregoing is a brief outline of what this lengthy book is about. What I can tell you is that while I already knew a lot of the information in this book and you can find bits and pieces in other books, there was a lot of new information and ideas. Most importantly, Shift has collected this information and filtered it through the perspective of a law enforcement officer. Most other books I've read dealing with defense of a home, neighborhood, or community assume a complete absence of law allowing you to respond to threats in a militaristic manner. Shift notes that the reality is that law and order will return whether it is within a few hours, days, or weeks, and you will face the consequences if you defended yourself unlawfully. We saw this in the aftermath of Katrina, for instance. Obviously justice was not meted out for every assault or death, but where there was evidence it was pursued.

There were certain points I could quibble with. For instance, Shift gave the impression that trees were only concealment and not cover, whereas tests I've seen involving shooting at trees to determine penetration have generally shown that a healthy tree of 12 inches in diameter will stop common rifle rounds, at least through the center line of the trunk. But I found the book to be well thought out and full of useful information and points to consider.

I would recommend this book to anyone living in a subdivision, suburb, or, even, a small town, as I believe it offers the most realistic assessment of civilian defense of a house or neighborhood, especially in light of Soros-backed prosecutors that worship at the feet of "wokeness" and will figuratively crucify any homeowner that dares to protect their property against a crowd. And should things go south where legalities are no longer a concern, Shift provides the basics for defense under those situations as well.