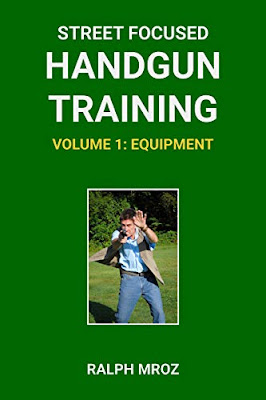 This book is the first of a three book series, with the other two covering the general topics of training and tactics, respectively. Mroz indicates the book is intended for the intermediate and advanced shooter. I would disagree, at least to this volume, because the book contains so much information that would be useful to even a beginner shooter, and probably save them hundreds of dollars and bad shooting experience. The book is intermediate to advanced in the sense that you generally don't learn the lessons set out in the book until you have become an experienced shooter. But perhaps the author recognizes that his advice might not be appreciated by someone that was not an experienced shooter.

I can say, however, that I wished that I had been given a copy of this book when I was younger and first considering concealed carry.

I grew up shooting, to a certain extent, because my father was a hunter but also enjoyed firearms, and so shooting trips were family activities. I didn't start to become serious about shooting, though, until my early 20s, when I was old enough to purchase a handgun for myself. That time--the early 1990s--was a time of considerable change in the firearms and shooting world. The "shall-issue" movement had just started, and only a few states required the state or local sheriff to issue concealed carry permits to eligible applicants, and widespread "Constitutional carry" was not even on the horizon. Thus, articles about defensive shooting and equipment was oriented toward the person using a handgun in the home. The "wonder 9s"--the high capacity 9 mm pistols that started to become popular in the 1980s--ruled the roost, much to the chagrin of gun writers who, almost exclusively, favored a 1911 in .45 ACP for defensive purposes. Most information on defensive shooting was delivered to the public through the major firearms periodicals, and the writers that penned those articles were typically writing from the perspective of a law enforcement background.

So that was the general background when concealed carry "shall issue" laws began to storm across the nation, including my own State of Idaho. When I embarked on the journey of concealed carry, there was very little good information for the civilian concealed carry shooter. The gun writers, which, as I noted, mostly came from a law enforcement background, viewed concealed carry from the perspective of a plains-clothes police officer or an off-duty police officer largely unconcerned if the weapon printed or his employer found out that he was carrying a firearm, as well as being unconcerned about the carrying of a firearm by someone with physical ailments or handicaps, or women. If you were lucky, the author might have had some experience carrying a firearm in an undercover assignment. I remember reading an article by an author whose background was executive protection requiring very discreet carry, and it was like a breath of fresh air.

The situation has vastly changed. There is plethora of good information from trainers and shooters that operate blogs, author books, and publish videos. Trainers now have decades of experience with analyzing, testing, and teaching techniques intended for the civilian shooter. So, whether their background is law enforcement, military, or some other background, quality and experienced trainers and authors have a much better understanding of the operational requirements of the civilian gun owner and concealed carrier. In addition, Internet sales of books gives us access to both old and new books on shooting and defense that weren't easily located when I was younger.

Now the problem is an overload of data, and trying to discern between the good, bad or indifferent. One of my goals with this blog was to try and point people to different sources and information to not only allow readers to find good and useful information, but present different perspectives.

What Mroz has done with his book is to distill a lot of information into a usable format. In addition, he has heeded the old adage that a book (or an article) should be like a woman's skirt: long enough to cover the subject, but short enough to be interesting. He also is willing to admit that there are different opinions out there on some subjects (even going as far as stating that he could argue the opposite or alternative position). And he kills some sacred cows in the process.

The subjects covered in the book are many and varied, and pertain not just to equipment, but also to use of the equipment. Keep in mind that this book is written for the person that is looking at defense from the perspective of someone interested in defending their household or the concealed carrier defending himself. He notes some instances where the military or law enforcement has a different mission and might need or use different equipment.

The topics include:
If you are a newbie, I would just recommend following the author's advice because it is very good and, to be honest, I agree with most of what he says. Experienced shooters and knowledgeable individuals probably won't agree with him on certain points, and that is okay because the author explains his reasoning and it challenges you to articulate your reasoning to the contrary.

For instance, with only a couple examples (small-of-the-back and ankle carry), Mroz appears to be fine with basically any holster or method of carry that works well for the person, even offering a defense of (gasp!) off-body carry. I know that a lot of experienced shooters will not agree. Off-body carry is generally verboten within the concealed carry community (with the possible exception of fanny-packs). Other trainers for whom I have a great deal of respect (e.g., Jon Low), take the position that safety considerations--particularly to avoid muzzling other persons or yourself--dictate strong side carry. And that may be good advice for newbies, for one of the benefits of experience is knowing when you can safely bend or break the “rules” of how best carry a handgun.

Another example is that Mroz very much does not like the DA/SA semi-automatic pistols. His reasoning is that the widely different trigger pull between DA and SA shooting not only results in most shooters missing the first shot, but that missing on the first shot is tantamount to negligence. On the other hand, there are experienced shooters who would disagree; in fact, DA/SA pistols are experiencing a bit of a resurgence of interest. I actually like DA/SA because I like the added safety of a long trigger pull for the first shot. But I also have experience shooting revolvers in double-action, including the heavy trigger pull of a S&W J-frame and my dry fire practice with the DA/SA is always in double action. Because of that, the long DA trigger-pull is not an issue for me at standard defensive distances, and the light SA trigger pull is really just a bonus.

But I appreciate Mroz's honesty. For instance, when discussing why he doesn't use the "best" ammo, he explains:


Handguns are all pretty pathetic as one-shot, right-here-now manstoppers. All of them. Nonetheless, the gun geeks spend countless hours going through the shooting data (such as it is) and the ballistics (which is plentiful) to arrive at the best wonder round with which to stoke their carry gun.

First, ballistic data is from gelatin blocks, which are homogeneous, non-motivated mediums, and thus very much unlike human beings. True, if you want to see how much destruction a round is likely to do on average in many actual shootings over time, they can provide a rough correlation.

But we don't care about damage; we care about causing the bad guy not hurting us. And here we are dealing with actual, motivated human beings. We want them to break contact (to quote Claude Werner), not die. I believe that most of the serious researchers have come to the conclusion that there's almost no difference in handgun calibers towards this end (breaking contact), which means that there's almost no difference in the particular round you carry in particular gun. You can search for material published by Claude and by Greg Ellifritz on this subject which has influenced me on this matter.

So, I don't obsess over the particular round in my .38 snubby or my 9mm pistol. In fact, I don't really want what the data would tell me is the "best"--which usually means the most destructive--round, because this round is likely to be one that's either exotic or not in widespread use [Ed: e.g., the Federal Ranger LE ammunition which is practically unobtainable for the civilian]. Instead I want a round that is in widespread use, particularly by law enforcement agencies and issued by my state's state police if possible. I don't want an unusual round in my gun for the same reason I don't want handloads. This just opens the door to a slimy prosecutor arguing, "The rounds that our state police carry weren't deadly enough to Mr. Mroz--he had to manufacture his own super-deadly rounds in his basement [or seek out exotic super-deadly rounds from merchants of death]." [Ed: "Objection. Lack of foundation, facts not in evidence, relevance.The issue, your Honor, is whether my client acted in self-defense, not the type of ammunition he used."]. If I'm in court, it's because either the facts of the shooting weren't clear (as they often aren't) or because the prosecutor is out to get me (as they often are, either to make some bones or because they hate guns). In either case I don't need to give them extra ammunition (pun intended) by my choice of it.

Every justified self-defense shooting involves survival of two kinds: during the fact of the attack, and after in court. If there's almost no difference in round effectiveness in the former (breaking contact), why stack the deck against myself in the latter?

As you can see from this excerpt. Mroz packs a lot of information into a small space and directs you where to find additional information. He does so throughout the book.

So, in conclusion, there is a lot of information packed into a small amount of material in Mroz's book. He has collected and presented in an interesting manner information that might otherwise take years and substantial effort, time and/or money to learn on your own. Consequently, I believe this book is a very useful and worthy addition to your bookshelf ... or, rather, your Kindle. The book is available as a Kindle e-book from Amazon for $4.49.