Glenn Reynolds has a new op-ed published at USA Today entitled "Don't let U.S. become next Rome." Reynolds has just finished reading Joseph A. Tainter’s The Collapse of Complex Societies, a book of which long time readers of this blog are aware, and which I summarized and discussed in depth here: Part 1, Part 2, Part 3, Part 4, Part 5 and Part 6. Reynolds begins his article briefly outlining Tainter's thesis--that increased complexity (i.e., costs due to taxes, increased laws and bureaucracy, etc.) eventually saps any surplus resources that a society may need to deal with a crises, resulting into its reversion to a lower level of complexity when a crises occurs. He then segues into a discussion of Puerto Rico and Illinois' debt crises, as well as what is happening in Venezuela. (I, too, have applied Tainter's thesis to Venezuela in this post from last year). I would recommend that you read Reynolds' piece at USA Today.

But Reynolds writes: "Our society isn’t likely to face a collapse like Rome’s — as Tainter notes, everything now is global." The problem with this conclusion is that it does not flow from Tainter's theory; in fact, Tainter indicated that a collapse could occur--only that it would be global, not national.

First, as Reynolds observes, the United States is not immune from the over-complexity. In Part 6 of my review of Tainter's book, I pointed out some statistics and articles that demonstrated the growing complexity of life in the United States. By coincidence, Reynolds also just cited in his Instapundit blog to an article from Isaac Morehouse on "Every Industry Gets Worse When Government Gets Involved." Both Morehouse and Reynolds prominently feature the following graph: 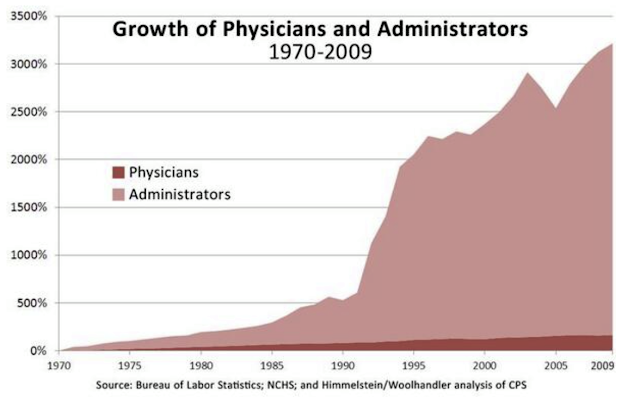 While the graph shows percentage growth rather than absolute numbers, it illustrates whole magnitudes of increased complexity in just one industry. Keep in mind, this was before the full implementation of Obama-care. And this is only one aspect of complexity (representing both a direct financial cost of the over-head required to pay all these administrators, as well as lost time and productivity dealing with a larger bureaucracy) in but one sector of the economy.

Second, Tainter did not say that the United States was immune from collapse. He noted that what he termed "peer polities" tended to increase in complexity lock-step. Tainter then explained:


Peer polities then tend to undergo long periods of upwardly-spiraling competitive costs, and downward marginal returns. This is terminated finally by domination of one and acquisition of a new energy subsidy (as in Republican Rome and Warring States China), or by mutual collapse (as among the Mycenaeans [ed: all the bronze age Mediterranean and Near East cultures of the time] and the Maya). Collapse, if and when it comes again, will this time be global. No longer can any individual nation collapse . World civilization will disintegrate as a whole. Competitors who evolve as peers collapse in like manner.

We are Rome (or, if you like, the the Qin and Han Dynasties). We are the single power that has dominated its peers; in fact, not only its peers, but its competitors. But even though Republic Rome came to dominate the Mediterranean world, it did not mean that Imperial Rome was immune from breaking apart, first, into the two halves of Empire, and then the continued disintegration of, initially, the Western Empire, and, eventually, the Eastern half (the Byzantine Empire). That the word "Byzantine" has taken on the meaning of something complex or intricate should be a warning of what happens to overly complex societies.
By Docent at May 03, 2016

Email ThisBlogThis!Share to TwitterShare to FacebookShare to Pinterest
Labels: Decline of Civilization