A Couple Reviews of the Olight Odin Weapon Light

In the summer of last year, Olight released their Odin weapon light with a maximum 2,000 lumen output. I bought one at the time as part of a flash sale, getting a really good deal on it (40% off), but never got around to reviewing it. However, I recently came across a couple reviews: a video from Andrew at AR15.com and an article from C. Travis at Guns America Digest.

VIDEO: "The Most Brutal, Most HONEST Olight Review You Will Ever See! Olight Odin Test" (11 min.)
Andrew torture tests the light by mounting it way forward so that it got hit from the gas escaping from the flash hider, and then dropping it repeatedly on a concrete block until the mount broke (the light kept on working). He then discusses a few things that he liked and didn't like.

One of the features he really liked was the method of recharging this light. Basically, it has a combination rear activation button and magnetic charging port using an induction type of charging. The magnets pull the charging cord and port together; but the magnets can also be used to attach the flashlight to a steel surface. The Odin is probably too big for that, but it works for other lights, including the Olight Bulb.

The cord plugs into any standard USB charger. There are lights on the cord that are red when charging, and change to green when fully charged. I like this feature as well, and Olight uses it on most of their rechargeable lights now. It is especially nice because there is no female charging connection on the light, so dirt or water can't get into the light that way.

On the other hand, Andrew disliked the mount for the light. Basically, the mount is designed to fit on a bit of Picatinny rail. The mount then has a slot on the top and to one side that can be used for locking the light into place. What Andrew didn't appreciate, I guess, is that if you only have rail space at the 12, 3 and 9 o'clock positions, the side slot means that you can mount the light at an 11 or 1 o'clock position, or you can use the slot on the top of the mount to put it at the 12, 3 or 9 positions. I put the mount on the 12 o'clock rail, used the side slot, which put my light off to the side at the 1 o'clock position.

Andrew also didn't like the fact that the mount was not quick detach from the rifle, but the flashlight could be quickly released from the mount and used in the hand. He thought it should have allowed the light to be easily switched from one rifle to another. I, on the other hand, liked the idea. Sometimes you want to use a flashlight without pointing your rifle at everything.

The article at Guns America Digest is "Olight Odin: The 2,000 Lumen Weapon Light – Review" by C. Travis. This is a great review with lots of photographs illustrating not only the features of the light and its size, but also showing how far it can cast a beam, and comparing it against other lights.

The main takeaway is that although at a significantly lower price point from some of its competitors, it is a well made light (it has an IPX8 waterproof rating), very bright, and can easily throw a beam on its high settings to 300 yards. When I first received the light, I used a laser range finder to find the distance to a tree down from us. After it was dark, I shined the light toward the tree and was easily able to illuminate it.

Anyway, good light in my opinion for the prepper wanting a good quality light without spending as much as for a Streamlight or Surefire, plus with some great features not present in those brands. I like the ability to recharge the light to minimize the number of batteries I have to carry or store, and I can charge it off a battery pack such as is used to charge cell phones or other small electronic devices. And that battery pack can, in turn, be charged using a small solar panel outfit intended for hikers and campers. 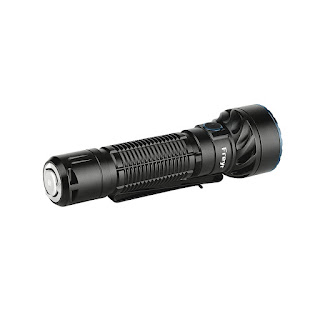