I mentioned a few weeks ago that I was in the midst of an AR pistol build in .300 Blackout. The impetus for the build wasn't that I thought "I need an AR pistol," but rather that I had leftover parts from prior projects, including some parts that had been replaced as I upgraded another AR and an unused upper receiver. To be honest, my first thought was to build an upper in something in .450 SOCOM or similar sized caliber that I could attach to my existing lower, but that would require enlarging the ejection port on the upper receiver I had laying around; a modification that I felt was beyond my abilities--at least with the tools I have. I considered building an upper in something like 6.5 Grendel or 6.8 SPC, but arrived at the conclusion that it wouldn't offer enough of a performance boost over 5.56 to make it worth the time or money (this was before the .224 Valkyrie was announced, which may have changed my calculation). But, with prices on lowers at near record lows, I decided on a pistol build.


Initially I was going to build an AR pistol in 5.56 mm, but the more I read up on the ballistics from the 5.56 and compared it with the .300 Blackout, the more I realized that .300 Blackout offered significant advantages out of a short barrel. There were also other considerations such as reliability, and muzzle flash and blast.

For one thing, a 5.56 is hard to run reliably in a barrel less than 11.5 inches. This is not to say it cannot be done, but that it takes a lot more tuning. Conversely, the .300 Blackout was designed around a pistol length gas system and will reliably run in barrels as short as 7.5 inches.

As you can see, this build employed a standard mil-spec, forged upper and lower. I mostly used a CMMG lower parts kit (including the trigger and the A-2 style pistol grip), with two exceptions. I was having some issues with a Strike Industries magazine catch in another rifle, so I swapped the SI magazine catch for the CMMG catch, with the latter working much better. The SI magazine catch accordingly went into this build, which works fine. I also had decided to replace my Strike Industries Strike Switch ambidextrous selector on another rifle with a standard ambidextrous safety selector, so I used the Strike Switch in this build and, between the smaller A-2 grip and purpose of this build, worked much better.

The barrel is a cold hammer forged 9-inch barrel from KAK Industries featuring a Melonite finish, a 1:7 twist, and 5R rifling. I decided on 9-inch simply because that was the point that there was full powder burn and, reading people's experiences in various articles and forums, it seemed 8 to 9 inches was really the sweet spot for a  short-barrel .300 Blackout weapon. I ended up using an Odin low profile gas block (also Melonite finished) and a Melonite finished stainless steel gas tube made by Spike's Tactical. My decisions on the latter two products was not "snobbishness," but I noticed when shopping around that there was generally only a small difference in price between the Odin gas block, and Spike's Tactical gas tube and similar products from "generic" manufacturers, so it seemed a no-brainer to go with the product from a reputable company.

The pistol buffer tube was a "no-name" from a local store. I used a standard carbine buffer and spring. I wanted an end-plate that could serve to connect a single-point sling. Again, shopping around, I discovered that the price for a castle nut and such a plate was as much or more as the Primary Weapons Systems Ratchet Castle Nut and Endplate set, which featured a quick detach sling point on the end plate. The other advantage I saw was that PWS ratchet castle nut would make it relatively easy to change out the tube if I later decided to convert this to an short barrel rifle (SBR) or switch to one of the pistol brace systems that use proprietary buffer tubes.

I do not have a present intention to use a sound suppressor with this AR pistol, so I decided to look at various muzzle devices. Initially, I was looking at various muzzle brakes or compensators, but realized from the reviews that they would simply aggravate flash and concussion. I finally decided on a linear compensator from Kaw Valley Precisions (KVP), which was very nicely machined and Melonite finished, and at a much more reasonable price than similar products from other manufacturers. It is available for both 5.56 and .30 caliber builds. From what limited shooting I've done, it seems to work as advertised.

I knew from the beginning that I would be using an M-Lok free float hand guard of some type. After shopping around, I found myself going back to Aeroprecision because they had a high quality product at a lower price point than anyone else: the Aeroprecision Atlas S-One handguard.

I really like the Atlas handguard. It is lightweight and quite slim, allowing for a solid, yet comfortable grip. It comes with a proprietary barrel nut, several shims for fine adjustment, a wrench for tightening or removing the barrel nut, and a torx wrench for installing and tightening the wedges that lock the handguard in place. As you can see, the current version only has a partial rail at the 12 o-clock position, which is no loss for most people, and is an advantage, I think, for the pistol build.

The photograph above should provide a good view of the Atlas S-One and Aeroprecision's standard free float handguard (mounted on one of their enhanced uppers). (The photograph also provides a good look at the front of the KVP linear compensator).

To counter the front-heaviness inherent in such a weapon, as well as to help steady the weapon, I attached a single point sling of the bungee style to the end-plate. With that wrapped around my neck and shoulder, the weapon is suspended in a handy position. Raising the weapon and pushing out slightly against the resistance of the bungee cording does a good job of stabilizing the weapon. The sling is one that has been sitting in a box for several years, so I don't even know its brand.

I've only done some function testing so far, but it shot the ammunition (some Federal 120-grain loads) without any issues--a nice change from my other AR that took some tweaking with the buffer before I could get it to shoot reliably (you can read about that here). One thing that quickly became apparent was that standard AR iron sights are impossible to use with the weapon extended. Obviously, I could use them if I shouldered the weapon, but that is not how I intended this weapon to be used. Accordingly, I will have to see if I can find some pistol style sights that I can use as backup sights. I also discovered that it is slow and uncomfortable to use a red-dot with an AR riser. However, I believe that a lower mount will work much better.

This was my first attempt to assemble the barrel and gas system for an AR weapon. It went surprisingly well, and I'm pleased with the outcome. 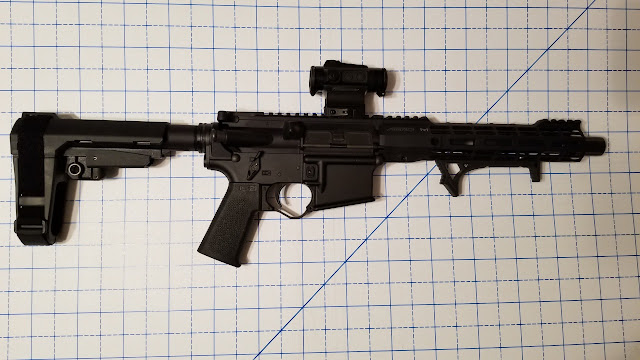 Recent Defensive Pistolcraft Post -- Shooting with One Eye or Both Eyes Open?

Jon Low at Defensive Pistolcraft published a new post this past Sunday . Jon has a lot of good information, comments, and links, so I advis...