Weeping and Wailing and Gnashing of Teeth From The Left (Updated) 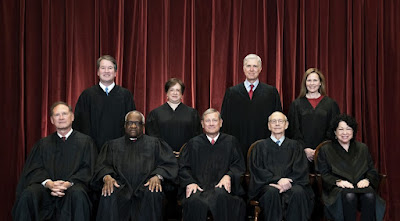 We know which way the Court is going because a draft decision in the case Dobbs v. Jackson Women's Health was leaked to a liberal media outlet, Politico, showing that a majority of the court agreed in overturning Roe and returning the legal question of whether to allow abortion back to the States where it belongs per the 10th Amendment. Justice Roberts has confirmed the authenticity of the document. You can read a copy of the draft here.

The leak probably originate with Amit Jain, a Yale Law graduate working as a law clerk to Justice Sotomayor. Vox Day describes Amit as a Fake American. In any event, his bio indicates a long history of working on leftist projects and causes. And, of course, he probably acted in accordance to the wishes of the politically powerful. Reports the Washington Examiner:

Brian Fallon, top spokesman for Hillary Clinton's 2016 presidential campaign and now co-founder and executive director of Demand Justice, called on "All Democrats" to show a similar sense of urgency "as the clerk who apparently risked his or her career to sound this alarm."

Since abortion has become one of the most basic sacraments of the Left, it is expected that the Left will react with protests and violence, which apparently had already started last night. But that is what the leaker wanted. The purpose of leaking this document is obviously to bring such public pressure on the Supreme Court justices (or violence, even) that one or more the Justices currently supporting the decision will change his or her mind.

Assuming that none of the justices change their minds (or removed by the Left), what would be the impact of such a decision? Jazz Shaw, at Hot Air, has some thoughts:

Supporters of the minority viewpoint in each state will no doubt continue to protest. This issue is surely among the most divisive in American culture and that won’t go away any time soon. But looking at the long-term ramifications, it’s not hard to see this as yet another keystone issue that will further encourage migration inside of the United States along ideological lines. Picking up and leaving your home is a major decision involving potential separation from family members and significant financial expenditures. But people have already been doing it over other divisive political matters such as tax rates, labor laws, or public school policies.

Abortion laws will almost certainly produce a similar effect. People will slowly migrate to states with laws that most closely match their beliefs and desires. Red states will become redder and blue states will become bluer. Primarily coastal blue states may begin regaining some of their recent population losses, potentially strengthening their position in the House of Representatives. Smaller, but more numerous red states could readily lock down their control of a majority in the Senate.

If enough of this sort of migration takes place, there may not be a need for a new civil war. The country could simply split up like two squabbling roommates who endure long periods of uncomfortable silence after realizing they have nothing left in common to talk about. But would we be better or worse off as a result? That’s just something to ponder while we await the final decision.

I think the reaction will be more violent simply for the reason that it is not in nature of the Left to quietly accept that not everyone wants to live in their hellscape. Like the scorpion and the frog, the Left will sting and sting again until it has either destroyed or assimilated its opponents, the consequences be damned. This isn't a disagreement between two reasonable neighbors, but a rejection of the Left's most basic religious rite, and, as far as the Left is concerned, there will be hell to pay.

Update: Check out Paul Joseph Watson's take on this matter:

Email ThisBlogThis!Share to TwitterShare to FacebookShare to Pinterest
Labels: Politics/Government