Wagging the Dog: Things Heating Up Over Ukraine

Last week, a former Ukrainian foreign minister, Vladimir Ogryzko, called on the West to break the Russian Federation up into 10 to 15 nations.

Speaking in an interview with Ukraine’s Channel Five on Monday, ex-Foreign Minister Vladimir Ogryzko argued that the West should “go all the way” on the issue and allocate hundreds of billions of dollars for new countries to be carved out of territory currently governed from Moscow.

“Imagine that a collection of independent 10-15 non-nuclear nations is created in place of the current Russian Federation… Who will benefit from this? Everybody wins,” Ogryzko claimed.

According to him, the US and EU would be able to profit highly from this state-making venture, and would make the money back that they spent rehashing Russia’s borders.

Over the weekend, news stories started circulating that, according to Biden Administration sources, Russia was planning a multi-front military invasion of Ukraine, involving as many as 175,000 troops, as soon as early 2022, and already had 100,000 massed near the border. Then Fox News obtained satellite imagery that purportedly shows a Russian military buildup near Ukrainian borders, including inside Crimea. One such camp, estimated to have 5 battalions of troops, was located 150 miles from Ukraine's border. The map below shows areas where Russian troops are supposedly congregating (source). 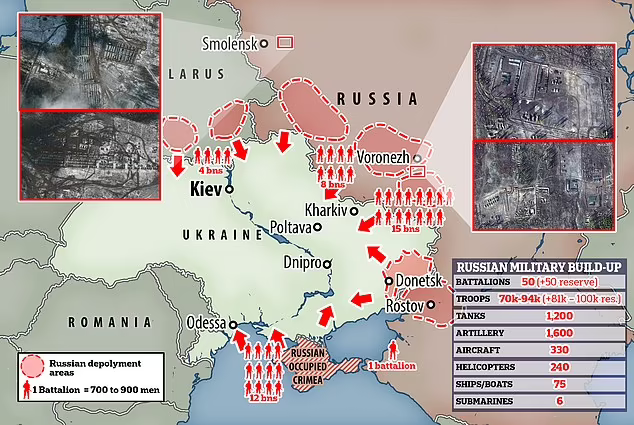 Russia's position all along has been that the United States and NATO should stop trying to expand NATO eastward and not deploy weapon systems near the Russian border. "Biden quickly dismissed Putin’s demands when asked about them Friday, the AP reported," characterizing the demands as a "red line."

"The Kremlin has also hit out at what it calls Western 'aggression' in the Black Sea close to Crimea, and increased bomber patrols which it says are straying ever-closer to its borders."

Meanwhile, the Biden administration has threatened Russia with economic sanctions if it should invade Ukraine, and "refused to rule out deploying additional US troops to Eastern Europe" should an invasion occur. A senior Administration official also "noted the US was ready to show a 'combination of support for the Ukrainian military, strong economic countermeasures, and the substantial increase in support and capability to our NATO allies' if Moscow moved forward with an attack."

So that is the narrative. The situation is more tangled and nuanced than the media has presented it. First, as I've noted before, Russia's largest naval base and its primary warm water port is at Sevastopol at the tip of the Crimean Peninsula.  Russia views it, and rightly, as vital to their national security interests. For reasons that I still don't understand, the Obama Administration believed that it was vital to have Ukraine firmly in the United State's camp. I don't know if this was because of Biden and other American politicians having family with interests in Ukrainian oil companies (e.g., Mitt Romney), because there were major energy pipelines running from Russia through Ukraine to Europe, or as part of an attempt to encircle and further box in Russia.

But whatever the reason, it appears that the Obama Administration was behind a change of government in Ukraine the put into power a Ukrainian government that was friendly toward the West, even desiring to join the E.U. and/or NATO.

For obvious reasons, Russia isn't too keen on having a hostile power on its flanks, and particularly wasn't happy about that hostile power being in a position to cut all land routes to Russia's primary naval base. Unfortunately for Ukraine, but helpful to the Russians, was that the Crimean Peninsula had historically been a part of Russia, and its people spoke Russian and identified as Russian, so it had a built in excuse for assisting the Russian speaking territory to exercise its U.N. guaranteed right to self-determination. So, with the help of Russia's "little green men," the Crimea asserted its independence from Ukraine, securing Russian access to its naval base.

Ukraine retaliated by damming "the North Crimean Canal seven years ago, cutting off the source of nearly 90% of the region’s fresh water and setting it back to the pre-1960s, when much was arid steppe." A severe drought this past year coupled with the Covid pandemic response and existing economic sanctions has increased discontent on the Crimean Peninsula and required massive expenditures by Moscow.

Crimea cost 1.5 trillion rubles to support in the first five years of occupation, equivalent to roughly two years of Russia’s education budget, according to one former central bank official — more than $20 billion at today’s exchange rate. This year, subsidies, grants and subventions alone will add up to around $1.4 billion. And the price tag is set to rise.

Water isn’t the only struggle, but it’s been the toughest to resolve, especially since winning the return of Crimea remains a priority for Ukrainian President Volodymyr Zelenskiy. Last month, the Simferopol reservoir was 7% full. Without water from the Dnieper River, Crimea’s arable land has shrunk, from 130,000 hectares in 2013 — already a fraction of Soviet-era levels — to 14,000 in 2017. Thirsty crops like rice have shriveled.

It wasn't until last year that officials were spurred into significant action on water, with a 48 billion-ruble plan that includes pipe repair to end wastage, well drilling and, crucially, desalination — expensive for crops, but a solace for residents. Government officials said at a Kremlin meeting on Thursday that the problem will be solved.

That’s a challenge. Even if there’s more rain this year, it’s long-term access to cheap water that is vital. That could easily be achieved by reopening the canal — an option Kyiv rules out. Barring that, the idea of a self-sufficient Crimea is a distant one, however many Chinese tourism delegations are welcomed in the hope of drumming up new sources of cash.

Russia has responded by closing off access to the Sea of Azov to Ukrainian ships, but that wasn't enough to get the Ukraine to back down.

More important for the U.S. is how Turkey acts. Turkey could close the Bosporus to military traffic as well as prohibit the U.S. from traversing its airspace or using airbases located in Turkey.