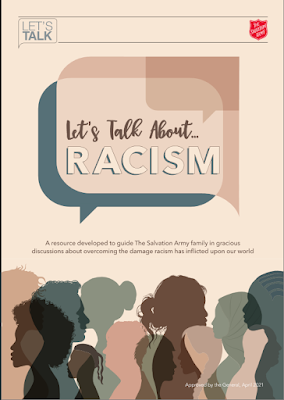 Fox 13 in Seattle has run the story: "'The situation is dire'; Salvation Army facing toy, donation shortage ahead of holidays." The article reports:

"There are many reasons why both financial and toy donations are down this year, not the least of which is likely pandemic fatigue and concerns about employment and the future," said Colonel Cindy Foley of the NW Salvation Army Division. "We are actually trying to provide food, shelter, toys and clothing to double the number of families we served last Christmas, and in the midst of the growing need we are seeing fewer people donating at our virtual and physical kettles."

Nowhere in the article does it mention the kerfuffle of just weeks ago over the Salvation Army's 67 page "Let's Talk About Racism" (PDF) discussion guide which appears to be a screed that is straight up espousing Critical Race Theory principles, including the primary logical flaw of CRT which claims that "race" is a social construct and doesn't exist, but then spends the rest of the document obsessing about race.

Of course, it is not enough to be "color-blind" and judge people based on the content of their character. Rather, as the guide points out, "The racial caste system does not require racial hostility or overt bigotry to thrive. It needs only racial indifference." You have to be anti-racist.

As starters, the guide indicates that members of the Salvation Army should "[l]ament, repent and apologize for biases or racist ideologies held and actions committed." "And as we engage in conversations about race and racism, we must keep in mind that sincere repentance and apologies are necessary if we want to move towards racial reconciliation." If you don't believe you have anything for which you should apologize, the guide suggests that "you can spend time repenting on behalf of the Church and asking for God to open hearts and minds to the issue of racism," adding, "[p]erhaps God spoke to you during your time of lament, and you have an idea of what you need to repent and apologize for. Please take time to write out or think about how you can repent and apologize (referring back to the six questions at the beginning of this session)."

And there are the anti-white parts of the document. For instance, the document defines "racism," in part, as "[t]he prejudiced treatment, stereotyping or discrimination of POC on the basis of race." It similarly defines a "racist" as "a person who belongs to a dominant or privileged group that discriminates against people of other races, or someone who believes that a particular race is superior to another." In other words, white people can't be subject to racism and black people can't be racist.

In any event, after there was a backlash over the guide, the Salvation Army withdraw the guide so it could make certain clarifications. They apparently hope that the guide is sufficiently memory-holed that they can get people to donate.

While I'm sorry that the Salvation Army is not able to help as many people as it had in the past, it was a forced error on its part. The Salvation Army was not forced to bear false witness against white people or to judge them on based on the sins of the father, so to speak.