Irony Alert: "Jews Are Not White" 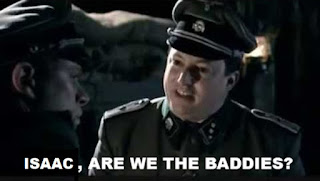 The article is "Jews are not white: Race and identity in Israel and the US" by Brian Blum and published in the Jerusalem Post, expressing his concern that Jews are being considered oppressors of the Palestinians.

When I was growing up in the US in the 1970s, I would often need to fill out some official form that asked for race or ethnicity. I always marked the box for “white” and sometimes “Caucasian.” I didn’t think much of it at the time. My Jewish identity wasn’t yet particularly developed. Of course I was white. What else could I be?

That’s come back to bite me – and Jews everywhere – big time.

To be white these days “is a kind of slander,” writes The Jerusalem Post’s Seth Frantzman. Jews have been transformed into “white Jews” which Frantzman correctly notes is, at its core, “anti-Jewish.”

Muslims in Albania are not called “white Muslims,” he points out. Nor are there any “white Hindus,” “white Buddhists” or “white Catholics.”

“Only Jews are called ‘white Jews,’” Frantzman stresses, which forces them into the “white category in America, the category that means ‘majority’ and ‘privileged.’” As a result, in some American circles, identifying as Jewish “has become synonymous with ‘white supremacy,’” he says.

That amalgamation is “obscene,” writes former Jerusalem Post editor and current New York Times columnist Bret Stephens, because it “lumps Jewish Americans with the sort of people who marched in Charlottesville [in 2017] chanting ‘Jews will not replace us.’”

The concern isn't with genetics--the Ashkenazim are most definitely Caucasian under that standard--but rather that if Jews are identified as whites--i.e., oppressors under Critical Race Theory--then that means that Jews are also oppressors; and if Jews are oppressors, then the Palestinians must be the oppressed. Or, as the op-ed characterizes it:

If the Israeli-Palestinian conflict is about race, Gordis posits, “There are not two sides with narratives that need to be heard, but rather, one side good, one side evil. [So] if you’re a Zionist, you’re a racist.”

The US has abandoned the proverbial “melting pot” metaphor for “a country of unyielding binaries, in which people are grouped as being either ‘of color’ or ‘white,’” writes Stephens. “The result is that the vast majority of Jewish Americans… are being shunted into a racial category with which few have consciously identified [and] which is alien to Jewish cultural, religious, and political traditions.”

“The story of the Jewish minority in Europe and in the Islamic world, which is the story of Israel, has nothing to do with race in America,” Friedman writes. “My grandmother’s parents and siblings were shot outside their village in Poland by people the same color as them.”

I could similarly say: "Mormon settlers were killed in Missouri and Illinois by people the same color as them." So what? This is just playing the victim card. As I understand this passage, Blum appears to be saying that CRT should not be applied to Israel and the Jewish and Palestinian problems because the Jews are victims, not "baddies."

Every country, every conflict and every individual should be judged on its own merits. This destructive binary applies an unfair and inappropriate American lens on Israel and the conflict. That won’t help us come to any kind of an equitable resolution. It will only lead the players who have the most at stake to dig their heels in further.

In short, Blum acknowledges that CRT--at least in relation to Israel--cannot lead to an equitable resolution, but he is not willing to go so far as to actually denounce CRT. He doesn't really object to CRT; only that the rules of CRT are being applied against him and his co-religionists. The irony in all of this being that CRT is a product of Jewish thinking and culture, stretching back to the Frankfort School.

Interestingly, the Bret Stephens article that is quoted by Blum is quite critical of "wokeism." For instance, the whole of the passage quoted by Blum reads:

The boundaries separating ethnic America from the WASP mainstream faded (though by no means disappeared) in the postwar years, mainly for good reasons: assimilation, upward mobility, and a growing intolerance of bigotry. Yet the fading of ethnic differences has had the paradoxical effect of highlighting racial ones. America no longer conceives of itself as either a melting pot or a salad bowl, to use the old metaphors for assimilation and cultural diversity. Instead, we are becoming a country of unyielding binaries, in which people are grouped as being either “of color” or “white.”

The result is that the vast majority of Jewish Americans — those who do not identify as “Jews of color” — are being shunted into a racial category with which few have consciously identified; which is alien to Jewish cultural, religious, and political traditions; and which, within living memory, was used as an ideological tool to slaughter Jews by the millions precisely because we weren’t “white.” If race is indeed a social construct, as the progressive Left insists, then surely the most obscene construct of all is one that lumps Jewish Americans with the sort of people who marched at Charlottesville chanting “Jews will not replace us.”

Stephens goes on to urge Jews to oppose "wokeism" because of the danger it poses to American Jews.

There are a few nonprofit groups that are rising to tackle this challenge, including the newly formed Jewish Institute for Liberal Values (on whose board I sit). But woke ideology needs to be seen as an acute threat and become a key item in the Jewish organizational agenda.

Nobody today would imagine, say, a female university president sitting still while a culture of misogyny and sexual harassment prevailed in faculty lounges or student dorms. Yet Jewish leaders and donors will often bite their tongues when the institutions they oversee or support become saturated with anti-Jewish animus. They would do better to stop writing checks; start speaking up boldly at board and faculty meetings; and, if they conclude they cannot rescue an institution, publicly and vocally resign to take their talent and money elsewhere.

Jews will not come out well from this series of unrequited love affairs, just as we didn’t come out well from our unrequited love affairs with German, Austrian, or French culture. There is broad support in the United States for Jewish Americans, demonstrated by the fact that Jews remain the most admired religious group in America and by the widespread support that Israel enjoys outside the progressive bubble (within which so many Jews live). But our non-Jewish friends need to be far more deeply engaged by Jewish communities, not held at arm’s length out of religious differences, political disdain, or simple ignorance.

This is quite the call to arms for Jews and will make them very uncomfortable. When Stephens talks about "Jewish 'allyship' in multiple civil-rights movements" he is talking about Jews having allied with blacks, gays, and feminists--groups that are now turning against Jews. Conversely, comments about "Jewish Americans hav[ing] sought the friendship of those who didn’t want us as friends and look[ing] askance at the friendship of those who did," is in reference to conservatives and Evangelical Christians who have long been some of the greatest supporters of Israel but treated with disdain by liberal Jews.

Email ThisBlogThis!Share to TwitterShare to FacebookShare to Pinterest
Labels: Society and Culture