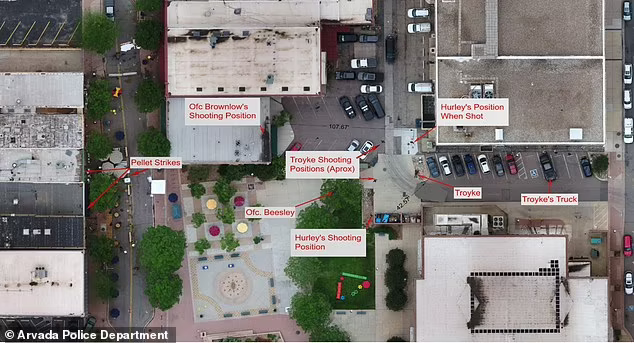 Marcus Wynne directed my attention to an article from the Daily Mail with the headline, "Colorado police officer WILL NOT face charges for mistakenly shooting dead a good Samaritan who had just gunned down a cop killer planning a mass murder," because of the lessons that could be learned from the incident.

[Johnny] Hurley was shopping in a store in suburban Arvada [a suburb of Denver], when Ronald Troyke, 59, - dressed all in black and carrying and AR-style rifle - shot and killed police officer Gordon Beesley.

Hurley rushed out of the store to grab his gun and killed Troyke. He then picked up the killer's military [sic] rifle as [Officer Kraig] Brownlow arrived on the scene and mistook him for an active shooter.

'The officer here had objectively reasonable grounds to believe, and did believe, he and other people were in imminent danger of being killed that day,' said [Jefferson County District Attorney Alexis] King at a news conference.

'The officer saw a mass shooter, heard many rounds of gunfire in broad daylight in the heart of Olde Town Arvada. … Thus, the decision to shoot Johnny Hurley was legally justified despite his heroic actions that day.'

The first lesson in this case is one that has been pointed out by many trainers with a law enforcement background: when you are involved in a defensive shooting, immediately holster the weapon after you have neutralized the threat so you don't get shot by responding police. An obvious corollary of this rule would be don't pick up the suspect's gun. If the suspect can move and you think it dangerous for the suspect's weapon to stay near the suspect, have him/her move away from the weapon; if the suspect is dead or unconscious, it doesn't matter.

A second lesson is the double standard for police versus civilians. The Daily Mail article relates:

Brownlow was finishing lunch with two other officers at a police outpost near Olde Town when they heard a series of gunshots. They looked out window saw the black-clad Troyke.

Only three minutes elapsed between the moment the three officers saw Troyke through the window and the moment that Hurley was mistakenly shot dead.

They watched the man turn toward the Olde Town Square, lined with restaurants and shops, but couldn't get a clear shot at the man. One officer, the District Attorney wrote in her decision letter, was wearing soft body armor that he determined wouldn't stop a round from the man's gun.

Brownlow ran to another door in the building to follow the gunman from inside, telling a female office worker to hide. From the vantage point of another door, he saw Troyke walking with the rifle before vanishing behind a set of trees before another round of shots could be heard.

Then, the officer spotted a man in a red shirt, later identified as Hurley, carrying Troyke's AR-15 and his own handgun, which he had used to stop the shooter in his tracks.

Hurley was fiddling with the rifle, and Brownlow thought he was reloading or fixing it while holstering his pistol, the decision letter said. The officer could see shattered glass from patrol cars in the parking lot, and saw the man in the red shirt walking toward businesses and shops.

He stuck his foot in the door to hold it open and took his shot.

'At that moment, from the information available to Officer Brownlow, Johnny Hurley was armed with a powerful rifle and handgun in a populated area amidst an active shooting,' read King's letter.

'Johnny Hurley was still, highly visible, with a wall of bricks behind him. If Officer Brownlow engaged before Johnny Hurley had a chance to fix or reload his rifle or turn his attention on the lesser-armed Brownlow, Brownlow would fire towards a safe backdrop that would not jeopardize others.'

Now, if you, as a civilian, mistakenly shot a person who was obviously not the original shooter you had seen, even if holding a weapon, you would probably be prosecuted for some level of homicide, even if only negligent homicide. Considering that DA King is a Democrat who was elected for the purpose of bring more "equity" to the prosecution of crimes, it is reasonable to assume that she would throw the book at a civilian defender that had shot the wrong person.

Email ThisBlogThis!Share to TwitterShare to FacebookShare to Pinterest
Labels: Crime and Punishment, Self-defense/Security