This is a repost of a review I published elsewhere in November 2012: 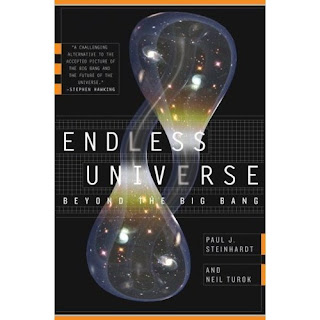 Overview: The authors present an alternative explanation to the standard Big Bang/Expansionist model of the universe, postulating a cyclical universe of two "branes" that separate and then rebound to create recurring "big bangs".

Impression: I first came across this book in the library several years ago, and then recently purchased it for my Kindle so I could re-read it, so I can tell you that I enjoyed reading the book. The authors have made the book readable, which is great for the lay reader (such as myself), but perhaps too simple for those with greater knowledge and background in physics and/or cosmology.

Notable Points: The authors begin the book by noting the universal acceptance of the Big Bang theory, but that, other than the basic idea, "nearly every other feature of the theory has had to be modified." In particular, they note the addition of dark matter, inflation, and dark energy to explain observations. They also note a fundamental problem--explaining why the Big Bang occurred and what was before the Big Bang.

The authors proposition is a cyclical universe that evolves through each cycle. As they explain:


Each cycle begins with a bang, but the bang is not the beginning of space or time. Rather, it is an event with a "before" and an "after" that can be described by the laws of physics. Each cycle influences the next. The events that occurred before the last bang shaped the large-scale structure of the universe observed today, and the events that are occurring today will determine the structure of the universe in the cycle to come.

The underlying model the authors propose is based on M-theory. Specifically, they imagine two parallel universes separated along an extra dimension.


The observable universe lies on one of the branes, often called our "braneworld." It is separated by a tiny gap, perhaps [10^-30] centimeters across, from a second "hidden braneworld." According to the equations of M theory ... all of the particles and forces we are familiar with, and even light itself, are confined to our braneworld. We are stuck like flies on flypaper, and can never reach across the gap to the "hidden" world, which contains a second set of particles and forces with different properties from those in our braneworld.

Although we cannot touch or see anything in the hidden brane world, its effect can be felt because gravity exists throughout space and can cross the gap between brainworlds. ...

... One appealing possibility (though it is not required by the cyclic model) is that the dark matter accounting for most of the mass in galaxies and galaxy clusters consists of matter lying on the hidden braneworld.

The authors idea is that the braneworlds oscillate, moving apart and building up energy, then move back together. A collision would produce a dense spray of energy, filling each brane with hot radiation--in other words, a big bang.
By Docent at December 10, 2019

Source: " The abandoned ski resorts that really did go downhill: 'Eyesore' facilities litter the Swiss Alps after Covid and glo...