This Is How Mini-Ice Ages Start 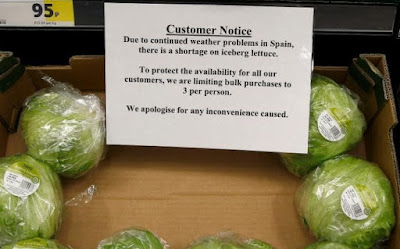 Between 950 and 1250 A.D., Europe (and much of the rest of the world) experienced warmer than normal temperatures in a period known as the Medieval Warming Period. The warming brought with it a period of prosperity and relative abundance, allowing the population to greatly expand, as did the areas under cultivation. Even Greenland was more hospitable, allowing the Vikings to colonize the island. (See also here).

But the warming period passed. The climate cooled. And in the early 14th Century, temperatures declined enough that crops failed from cold weather and excessive cold rains. "Later branded the Famine of 1315-1317, this disaster marked the beginning of a decrease in European population that would last more than a century and a half. Many cities were hard hit—for instance, in Ypres (Flanders) a tenth of the population died in six months and in Halesowen (England) the population dropped by fifteen percent during this period—all this led to general de-urbanization across the continent." The Viking settlements in Greenland were abandoned. This was the beginning of the Little Ice Age that lasted from 1300 to about 1850.

As a result of the cooler weather, famine stalked the land. And driven by the colder weather into closer contact with humans somewhere in Central Asia were marmots bearing a particular strain of y. pestis that caused pneumonic plague... .

Which brings me to this article from The Telegraph: "Great British salad shortage could spread to carrots and parsnips". From the article:


The Great British salad shortage could spread to carrots, parsnips and other vegetables after weather forecasters predicted a cold snap which could send temperatures plunging to 5F (-15C).

Now local supplies are also under threat, as British farmers face frozen fields just as they harvest their root vegetables. The supply shortage should see prices rising, experts have warned.

According to the article, the sub-freezing temperatures are the result of a weak polar vortex and influx of warmer air masses from the North Atlantic into the Arctic, forcing cold Arctic air down into Europe, Asia, and North America. This follows on a similarly cold winter and spring in 2013.

The article also mentions that:


Britain’s salads could also be impacted by a shortage of olive oil, after government officials in Spain warned that the deadly bacteria Xylella fastidiosa had been found in groves on the Balearic Islands.

The disease has already affected thousands of olive trees in Italy and experts are rushing to control the new Spanish outbreak before it spreads to the mainland.