This is a couple weeks old, but still interesting. From the International Business Times:


Greek authorities have discovered a gargantuan cache of weapons aboard a cargo ship headed to an Islamist controlled area of Libya.

The coastguard said a search of only the first two of the 14 containers carried by the Bolivian vessel Haddad 1 had revealed almost 500,000 rounds of ammunition and 5,000 shotguns, of a type similar to that used by police, with no accompanying documentation.

They were found at the bottom of the containers, concealed by a load of furniture, including drawers, cupboards, and a layer of gymnastic mats.

The story indicates that it was believed that the weapons and ammunition were intended for the ISIS affiliate in Libya. However, Turkey, where the shipments originated, has stated that the weapons were properly documented and being transported for use by Libyan police.

A photograph from the story shows the type of shotguns found: 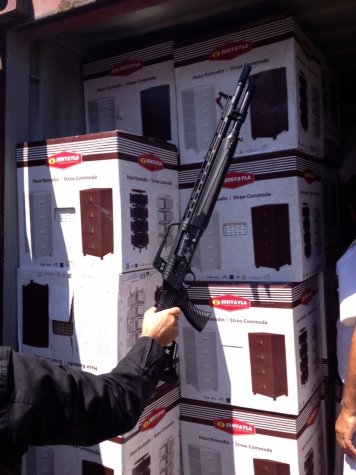