The PIGS Are Not Happy 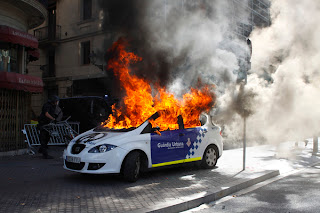 The $172 billion Greek bailout package hammered out in Brussels Tuesday averts a looming Greek default and, its architects hope, will ward off dangerous financial consequences for neighbors.

The sheer size of the bailout and a promised debt write-off of roughly 100 billion euros ($132 billion) represents a more favorable outcome than Greek officials expected. But the bailout comes with rigorous budget cuts demanded by northern European states and other requirements that represent an unprecedented amount of European Union control over a sovereign member.

"We have been learning for years how to share sovereignty in Europe," says Loukas Tsoukalis of the University of Athens and head of the think tank Eliamep, which deals with European and foreign policy. "With the crisis, we are all being asked to take some difficult steps further. It is uncharted territory. If you are a country on the verge of default, such as Greece, sovereignty and economic survival may create awkward tradeoffs."

Yet with strikes planned in Athens today and public opinion on spending cuts ranging from resignation to fury it's unclear whether the Balkan state can deliver on its promises and restore the kind of economic growth needed to meet its budget targets.

"There's a serious contradiction among the people," says Charalambous Tsardanidis, director of International Economic Relations in Athens. "Greeks accept and insist on staying in the eurozone. They don't want a return to the drachma. All polls show this. But with the same majority, we don't see the austerity programs as an answer. After all the austerity, we still don't see an answer. We need to see development, jobs, building highways -- but that's not what the bailout deal is concerned with."Greek unemployment is 20 percent, citizens have lost a quarter of their income in the past four years, and removed an estimated 60 billion euros from local banks, fearing their collapse.

The Spanish aren't too happy about the imposed austerity measures either:


After four days of daily protests, some violently dispersed, Spain is bracing for a cycle of social unrest against the harshest austerity measures in decades. At stake is not only Spain’s economic recovery, but that of the European Union.

Prime Minister Mariano Rajoy, of the conservative Popular Party, pled yesterday for calm and sacrifice after hundreds of thousands marched against his labor reform on Feb. 19. He insisted he has no intention of backtracking on steep budget cuts that have only begun to be introduced. Even on the campaign trail, Rajoy warned of pain to come – and his party was still elected.

But while Spanish and European authorities say budget cuts are necessary, experts warn the Spanish measures could be too much, too fast. A population already on edge could be galvanized to action. Social instability in a country the size of Spain, especially in rejection of European Union-imposed policies, could spread to other countries in the eurozone facing angry publics.

“The government’s legitimacy could soon be questioned on the street," says Jaime Pastor, professor of political science and an expert on mass mobilizations at UNED, a university. “The ghost of Spain turning into the next Greece is still there. If the trend is for Spain to follow that model, the European crisis is going to get worse."

They will soon be looking for a strong leader to ride in on his white horse and save the day.

Email ThisBlogThis!Share to TwitterShare to FacebookShare to Pinterest
Labels: Europe