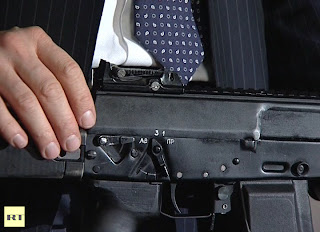 Kalashnikov have unveiled the latest incarnation of their iconic assault rifle, the AK-47. The company says new generation firearm called the AK-12 combines reliability with precision, and can be used with one hand.

­The factory which developed the new rifle decided to stick with the classic layout of the AK-47, even though it is a completely new weapon.

The Kalashnikov makers claim its has better range, increased fire dispersion, better ergonomics, usability and a potential for configuration changes.

The new weapon is as reliable as the AK-74, the Izmash factory CEO Maksim Kuzyuk says, but the dynamic characteristics differ significantly. It considerably increases the accuracy of shooting. The rifle is capable of firing in three modes: single shot, three shots and automatic fire mode.

Also, AK-12 is capable of using magazines of various types and capacity.

The basic feature of the new rifle is its modularity. It will serve as a basic platform for designing of over 20 modifications of small-arms weapons of various purpose and calibre.

AK-12’s composition allows operating it single-handedly, and can be converted for left or right handed use.
The rifle can accommodate night vision and Holo-sights, target indicator, or a light grenade launcher.

The AK-12 is undergoing firing tests in extreme conditions which should be completed by the end of the year. The Russian Ministry of Interior has already agreed to test the AK-12 in its special police units after official certification of the weapon.

I think the saying that "when guns are outlawed, only criminals will own guns" has finally moved from a truism to an axiom. Chicag...